My First Impressions of Sri Lanka 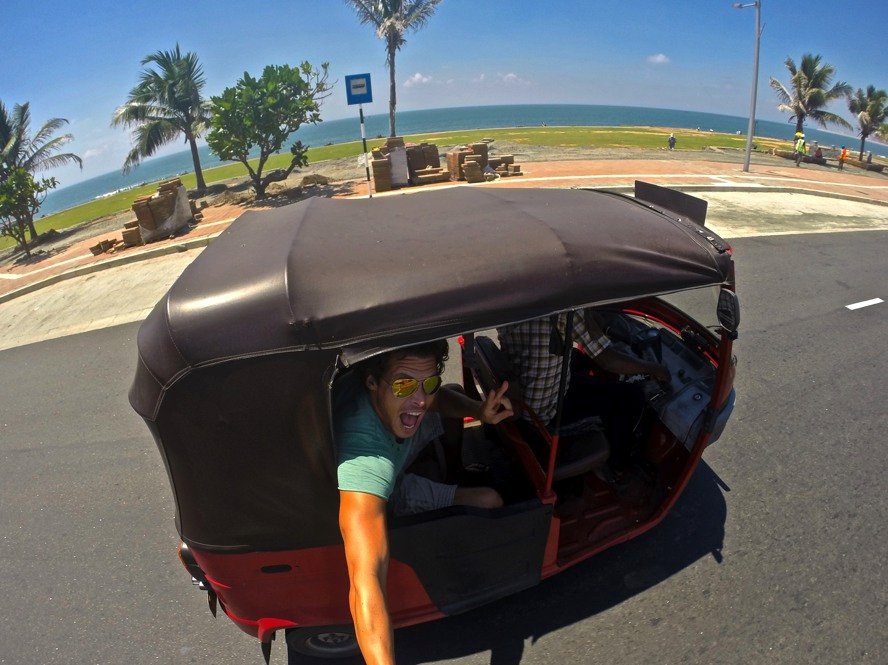 It is hard to find a country that is easy accessible, where the tourism industry is flourishing and where I have not been yet, especially in Asia. Though two very well travelled countries were topping that list: India and Sri Lanka. Somehow so far I had never been tempted to go there, although the growing curiosity for especially India. Since there are so many different stories out there, some good, some bad, I thought it was time to put it to the test. A couple days later I flew out from Abu Dhabi and had a smooth landing with Eithad in Colombo: I made it to Sri Lanka.

Where to travel in Asia?

Although I always knew that I was going to travel here some day, I did not really plan to come here now. Since I ruptured my eardrum while diving in Thailand there was no point for me staying on Koh Tao. Diving was the main basic purpose why I was staying there and that was impossible for the next 8 weeks. Two days later I flew to Dubai, just for a couple days I though initially, but in the end I stayed there almost 3 weeks. Mostly cause of my cousin and her husband who hosted me all this time, which I’m extremely thankful for! During my days on the beach I had time to think about where to go and what to do. Of course I looked at Google Maps loads of times to area’s of the world I had never been. At first I wanted to go to Northern India and make my way up to Pakistan and may be catch a glimpse of the K2 Mountain. So I started googling about visas for India and Pakistan. It was then when I discovered that it was fairly impossible to get an Pakistani visa abroad. Which basically means you have to apply for it in the country of residence. Probably it is a pain in the ass for Pakistani people to get a EU-visa, so Pakistan is not making it really easy for us either to get one for their country. I can somehow understand it, but on the other hand I was willing to spend money in their country, stimulate the local economy and explore and tell stories about it, making it a topic. Unfortunately I can’t and I had to come up with an alternative for Pakistan.

Travelling in such an enormous country like India can take up to a couple months, so I decided to get my Indian visa and just travel around there before heading back to Koh Tao again for diving. Surprisingly obtaining a visa for India was not really a straightforward process in Dubai. Because I was not permanently living in the UAE I needed to arrange two extra statements. The first one was hilarious: on a random piece of paper I had to write my name, a signature, the date and that I wanted to go on a holiday to India. That’s it! The second one was sadly enough not that easy, cause they demanded a statement from the Dutch Embassy that I was registered in The Netherlands and therefor was a visitor in the UAE.

When I contacted the Dutch Embassy they said that they had never heard of this procedure and that they don’t hand out such statements.  Being caught up in this bureaucracy was driving me nuts but then came up with the magical idea to arrange my Indian visa in Sri Lanka.

Getting your Indian Visa in Colombo

Applying for an Indian visa in Colombo is nowadays a straightforward process and as long as you have the required documents ready it wont be that much hassle to get one.

If you are really lazy, you can just take a tuktuk to the IVS Lanka and go next door to one of the little shops, give them your passport. They will prepare all the necessary paperwork, which will set you back about 700 Rs, about $5, including two pictures. It is really easy to do it yourself online though and let the hotel print out your forms. Be careful there are some pitfalls as your current address needs to be the address of your hotel in Sri Lanka. It is also advised to apply for a 6 months visa, multiple entry and port of entry and exit should be ‘ALL PORTS’. Make sure you bring two picture that are exactly 2x2mm and a copy of your passport and a copy of your Sri Lankan visa. Once you got your stuff organised, enter the IVS where they make you fill out a little paper, you wait for a bit, in my case only 20 minutes. I had to pay the amount of 5,847 Rs, just $45. You straight away get your passport back and after my travels through Sri Lanka I have to drop it in the morning between 9-11am and collect it the next day between 4-5pm. This all sounds pretty convenient and this is the way it should be everywhere. Visas are already a freaking pain in the ass, so don’t make the process to get one too complicated please!

First thing to do when arriving in Sri Lanka

I am here now for only a couple days, so it is hard to tell something about the country. I stayed in Colombo just because I had to arrange the visa and fair enough but that’s about the only reason I can think of to stay in this city. There are some kind of temples you can visit and there is bit of historical Dutch architecture to take a look at, but so far there was not really anyone who could tell me something exciting to do there.

Getting a Sri Lankan SIM card with data

On the airport I arranged a Sri Lankan SIM card from Dialog for 1300Rs ($10), which enables me to use 5GB data and 150min calling time for the next 30 days. Excellent deal and so far the coverage is pretty good and the internet stable and fast.

Taxi from the airport to downtown Colombo

Coming in at night from the airport by taxi which set me back 2500Rs. ($19), Colombo was not like something I had never seen before, just another worn out Asian city with too much traffic if you ask me. The people though are really polite and friendly.

Getting in touch with locals in Sri Lanka

They all ask you which country you are from and try to start a little conversation. Of course they are not the tallest so I’m like a giant for them, which makes them look really sweet actually. So far they really touched my heart and of course there is always a dispute about a little bit of money, but once you arranged a price it is all good. Whether it is on the streets trying to change money or that tuktuk ride that costs you $1, once you settled they will help you with a big smile!