3 Best Things To Do In Reutte, Tyrol 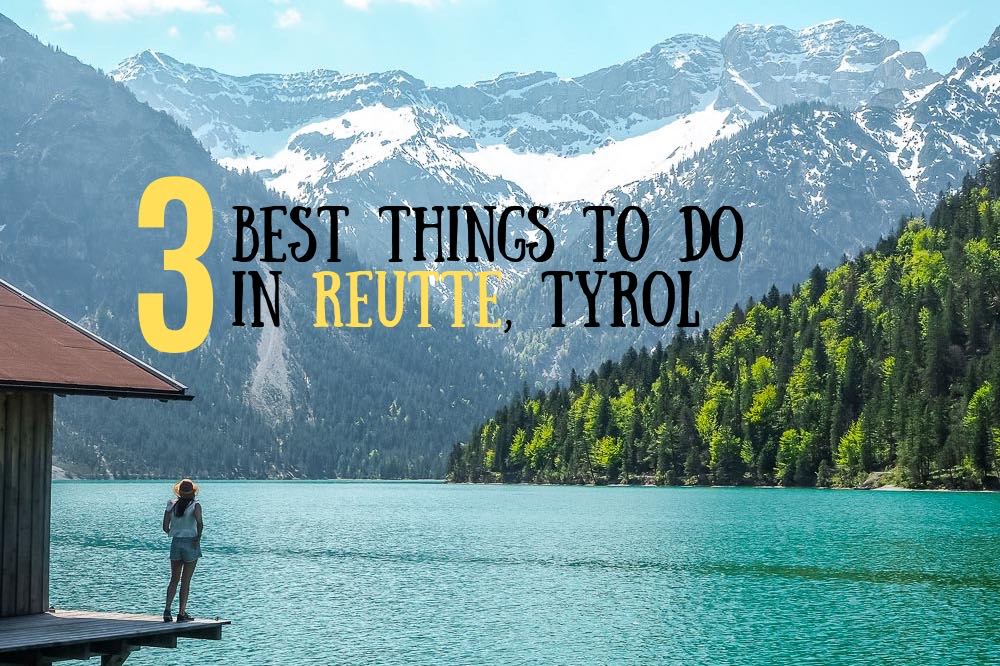 Taking the cable car up to the mountains, all the outdoor activities, indulge in wellness treatments or even plan a guided multiple day hiking trip are possible things to do in Reutte in Tyrol. In the beginning of June 2019 I stayed in the Bauernlodge in Höfen and explored this beautiful region. The host of my the Bauernlodge even organizes guided hikes into the mountains, day trips or multiple days with overnight stays in Alpine huts. I am sure you will be infected with his love and enthusiasm for Reutte and the surrounding mountains! If you are looking for other activities to fill your days during your Reutte holiday you can consider one of the other things to do and places to visit below.

Before arriving at the Bauernlodge in Höfen the hosts, Chris and Ingrid, already provided me some Reutte travel tips and as we could only check in as of 4 PM, we had enough time to already explore the area. The hosts advised me to visit Schloss Neuschwanstein, or Neuschwanstein Castle as it is known to the millions of foreign visitors each year. The castle is one of the three most visited tourist attractions in Germany. Neuschwanstein was built by King Ludwig II of Bavaria. It took 22 years to finish the castle. The castle was built solely for King Ludwig II (who didn’t want anyone to visit the castle). In the end King Ludwig only slept 11 nights in Neuschwanstein Castle. 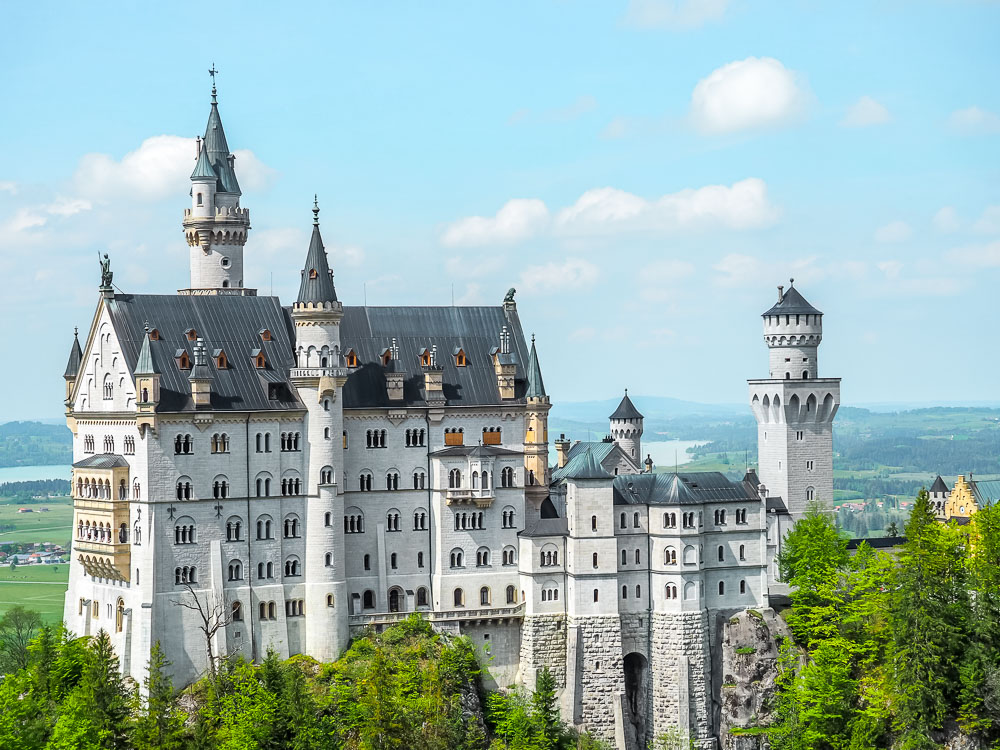 Neuschwanstein Castle is also known as the Fairytale castle or the real-life Disney Castle since it inspired Walt Disney to create the Sleeping Beauty Castle and the Magic Kingdom logo.

Neuschwanstein’s location is also a fairytale one. It is situated in the foothills of Alps in Bavaria, Southern Germany. It is about two hours by car or train from Munich or 1 hour and 40 minutes from Innsbruck. The castle is located close to the town of Füssen, which is also a popular place to visit in Germany. We passed Füssen on our way to the Bauernlodge, so it was easy to combine this… no thinking twice to stop here and for sure we didn’t regret this afterwards.

There are several ways to admire the castle. We did not visit the castle itself as you need to get your ticket for the castle tour before you do anything else and there can be a waiting line at the ticket booths. We decided to walk up to the viewpoint of Queen Mary’s bridge, also known as “Marienbrücke”. The hike took about 30-40 minutes where you will get the iconic view of Neuschwanstein Castle. The walk up is quite steep, but good things never come easy… The suspension footbridge behind the castle, where some of the lovely shots of Neuschwanstein with Schwangau in the background have been taken, is older than the castle itself. It bridges the gap over a waterfall nearly 100 meters below and is not named after King Ludwig's mother.

You can also choose to take a shuttle bus, instead of getting a workout during the walk up, which is maybe more convenient if you’re a senior. Both options of going up also apply when you want to visit the castle itself, instead of the Marienbrücke. Small side note: photography and video are not allowed inside the castle! 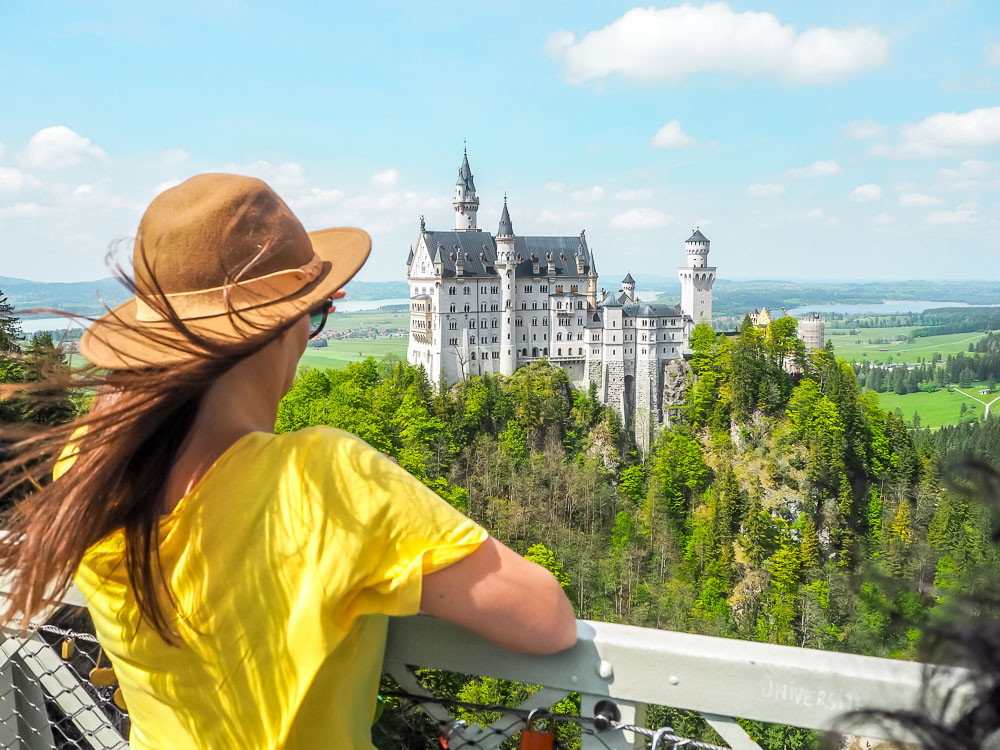 In high season, the castle is jammed full of tour groups from early morning till late, but we were quite lucky as apparently, we arrived in and between busses and we visited this place quite late in the afternoon so a less busy time. So, after the steep hike we were rewarded at the bridge with a magnificent view of the castle, on the top of a hill and I am sure you will be amazed by the extremely beautiful landscape.

The location of the Bauernlodge is also good in terms of visiting lakes, as there are 12 crystal clear lakes in the close surrounding so your options are endless… We chose to visit Lake Plansee which was only a short drive of 10 minutes away from the lodge. We were told that the surrounding of Lake Plansee reminds a bit of the fjords of Norway and it truly is one of the prettiest sceneries I have laid my eyes on. When planning my Tirol getaway, I did not imagine spending the day on a boat or tip my toes in crystal clear water, still freezing cold in May, but the Tyrol region offers great lake destinations. Visiting the lakes is one of the best things to do in Reutte, but Lake Plansee was my highlight. 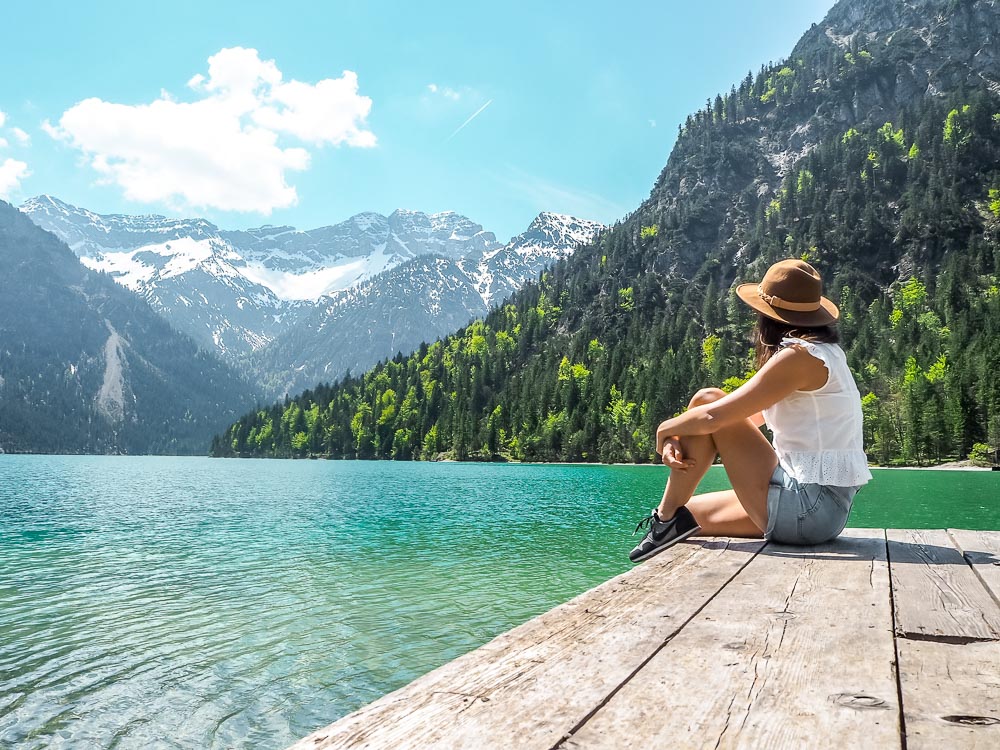 Plansee is Tirol's second largest lake after the Achensee and is one of the cleanest lakes, it rests in the Lechtal Alps and the Wetterstein and Mieminger mountain chains. This lake is fed by another lake, the Heiterwangersee, which lies at a higher altitude and the lakes are connected by a narrow canal. The Plansee’s swimming area can be found north-east, where you can find sunbathing lawns and crystal-clear waters. During summer this is one of the best places to visit in Reutte and I could see myself swimming, canoeing or joining a sailboat on one of the lakes. It is quite unique to see sailboats floating around in between the mountain scenery, another reason to visit Reutte.

I was intrigued by this place; the beautiful reflection of the mountains in the icy cold turquoise water and the jaw dropping landscape.  Besides the beauty of Lake Plansee and its peaceful environment, it is a great place to relax during your Tirol holiday, especially if you like to spend time outdoors. You can hike the woods around the lake and explore waterfalls, camp under the stars and the towering mountains and even swim. It is not only popular with hikers, but also motorcyclists, fishermen, photographers, cyclists and divers were spotted along the stunning lakeside. The access to the Plansee is free of charge, though if you would like to use the sunbathing lawns at the campsite you will be charged a small fee.

Whenever I mention the Highline 179 to people who have been on an roadtrip through Austria, they all know the bridge, but not many have crossed it themselves. We chose Highline 179 to be the prefect fun activity in Reutte as it combines a thrilling bridge crossing with two castles and stunning views. It’s located close to the town of Reutte, Tyrol. It’s a super fun place and very easily accessible from Munich as well. In my opinion worth the stop and a great thing to do in Reutte. 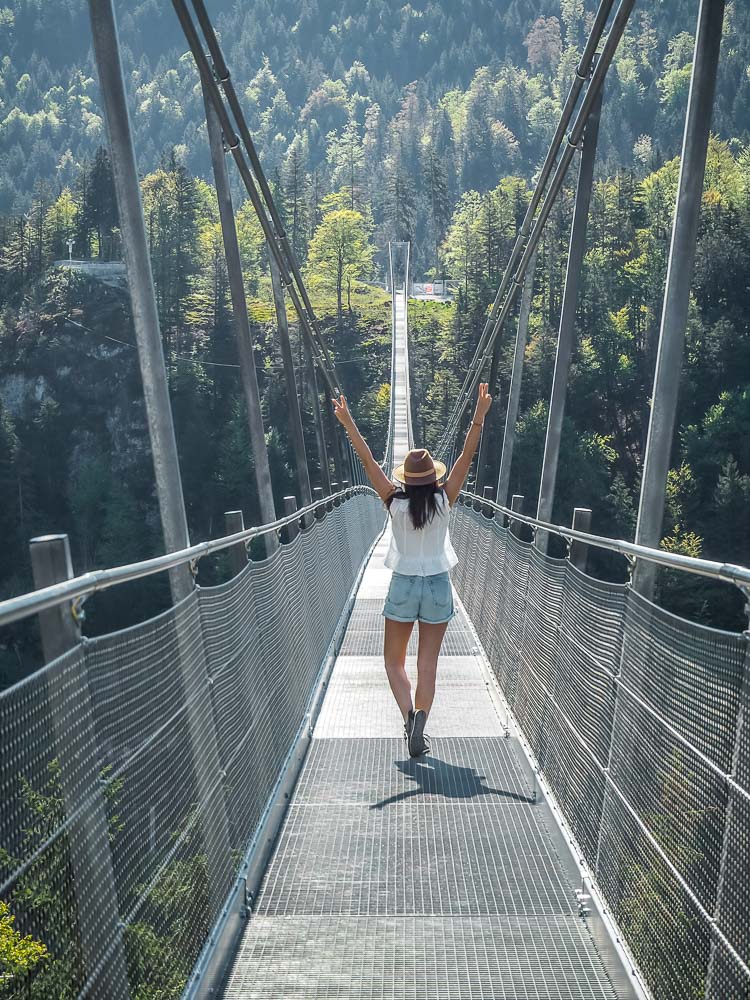 Highline 179 is the world’s longest pedestrian rope bridge Tibetan style, since being completed in 2014. It is 406 m (0,25 mile) long and connects Ehrenburg castle ruins with Fort Claudia. The Highline 179 suspension bridge offers an incredible view of castles, Roman ruins, and the Alps. Highline 179 is open daily from 8AM till 10PM. The entrance fee is 8 euro for an adult and 5 euros for children. You can visit the ruins for free but a ticket will be necessary to cross the bridge.

Highline 179 features a perforated walking surface and is surrounded by stunning mountains and valleys always in sight, not for the faint of heart! Those who dare can open their eyes… who doesn’t love to take a walk on the wild side? I am not afraid of heights but I can imagine for those who are not so much keen of heights that this Reutte activity is slightly terrifying. For me visiting this suspension bridge was one of my most fun things to do in Reutte!

The incredible view of the castle and surrounding mountains are breathtaking. Not to mention it’s an amazing place for a photo.

Overall this trip to Tirol was great fun and exceeded my expectations! Not every trip we take is to an idyllic sandy beach destination, but paradise doesn’t have to be tropical. The opportunities to explore and indulge in nature in Tyrol are endless… worth a visit and if you go try to enjoy all the places to visit in Reutte as much as I did! 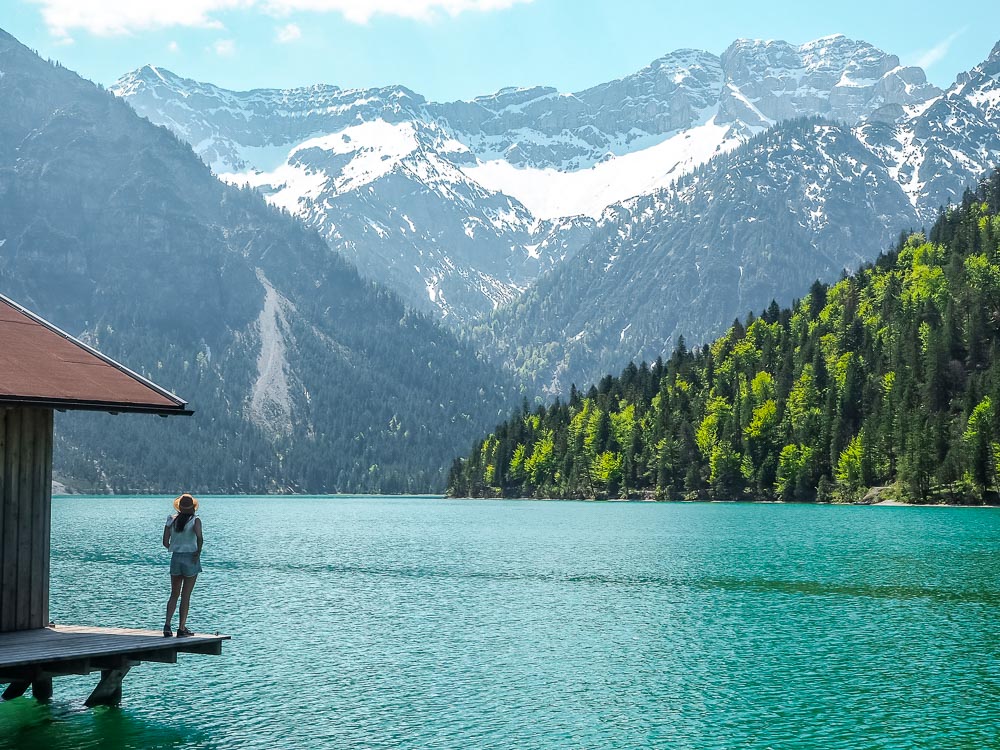 Zum Wohl is how they say it in Austria.

This blog is written by @fromsaarwithlove, who is part of the Traveltomtom explorers team. She also wrote the Bauernlodge Höfen review.

37 Things To Know About (Apres) Ski In Sölden, Austria

Why you should go snowboarding in Hintertux!