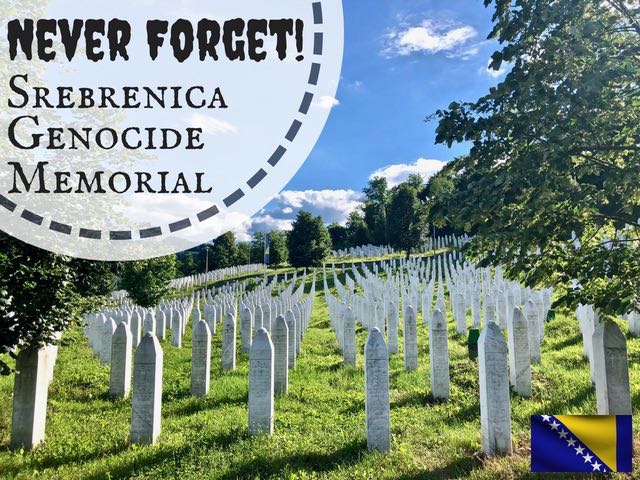 Of all the countries I passed through on this Balkan road trip it was probably Bosnia that stole my heart the most. Before my trip I thought it would be Montenegro, but things turned out the be different. At the end of my Balkan trip I was in southwest Serbia visiting Uvac Canyon close to the Bosnian border and I decided to travel to Bosnia once again the day later.

Normally this sleepy mountain village in East Bosnia is not a famous tourist spot, but for me as a Dutchman there is an extra reason to travel to Srebrenica. Srebrenica was declared a Safe Zone for Bosnian Muslims under control by the Dutch United Nation enclave during the Bosnian War. Sadly this went completely wrong and ever since Srebrenica is known because of the biggest genocide after World War 2. 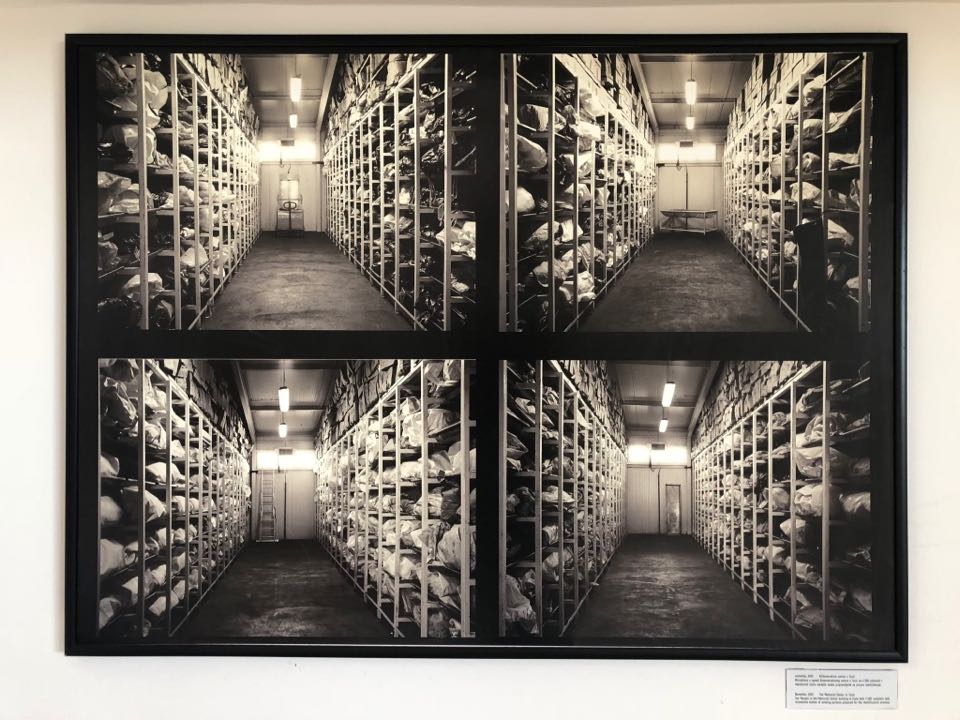 A little history lesson before your visit to Srebrenica

During the fall of Yugoslavia in 1992 Bosnia held a referendum to declare its independency. This was boycotted by the Bosnian Serbs and the Bosnian Croats who were a huge part of the population. After Bosnia declared itself independent from Yugoslavia hell broke lose and the fight between the Bosnian Republik army and the Bosnian Croats and Serbs is known as the Bosnian War. The war lasted for 3,5 years and ended in December 1995. Sarajevo was the epicenter of the war but Srebrenica unfortunately became an iconic event in the war as well with the July 1995 genocide. 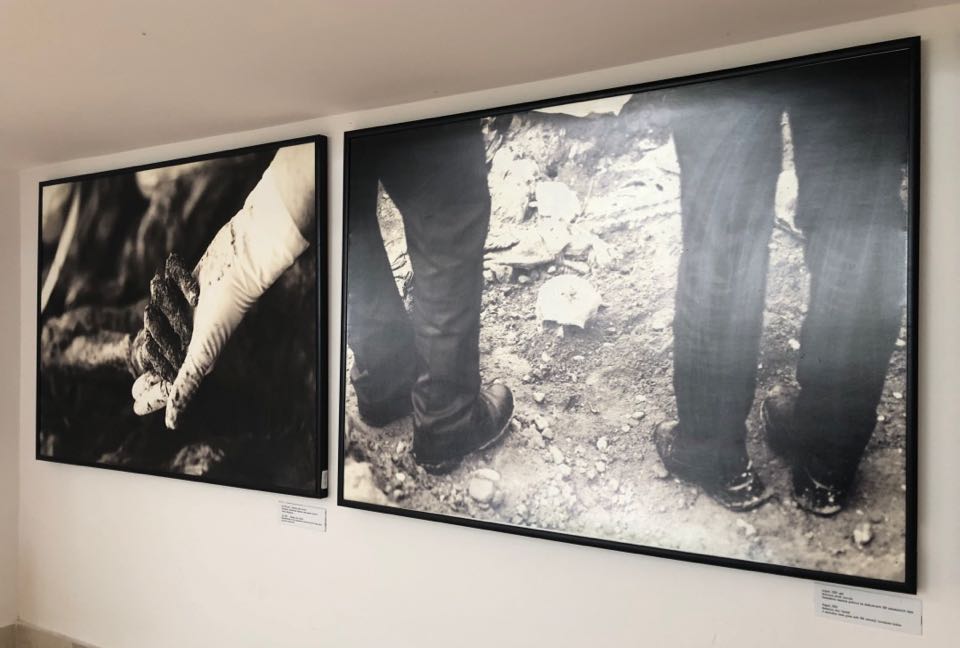 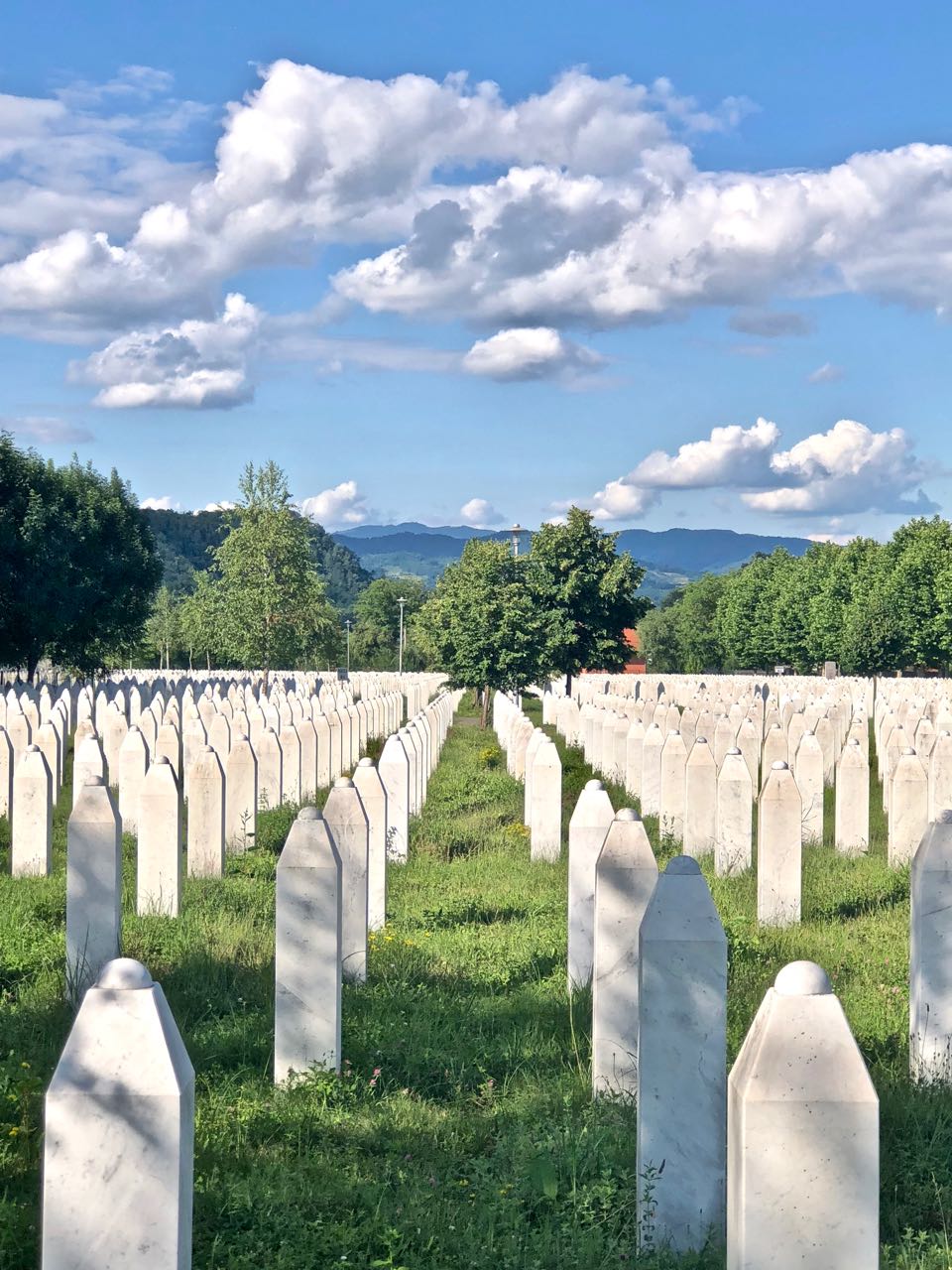 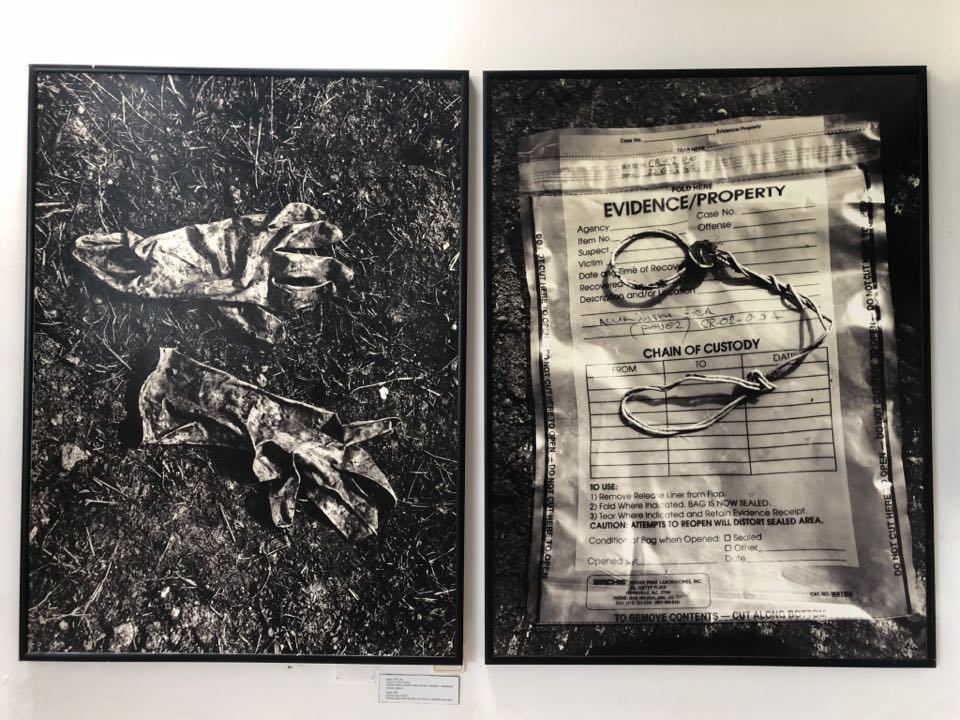 In total 20,000 to 25,000 refugees fled to the Dutchbat headquarters in the nearby village of Potocari where there was only space for a couple thousand people. The separation of Bosnian Muslim men and women is what followed, the genocide had started.

In total more than 8,000 men were separated, deported and killed by the Bosnian Serbs in just a two days. This event will always be remembered as the Srebrenica Massacre.

Interested in reading more about this horrific event then have a look on Wikipedia. Be aware that what you will read is very confronting! 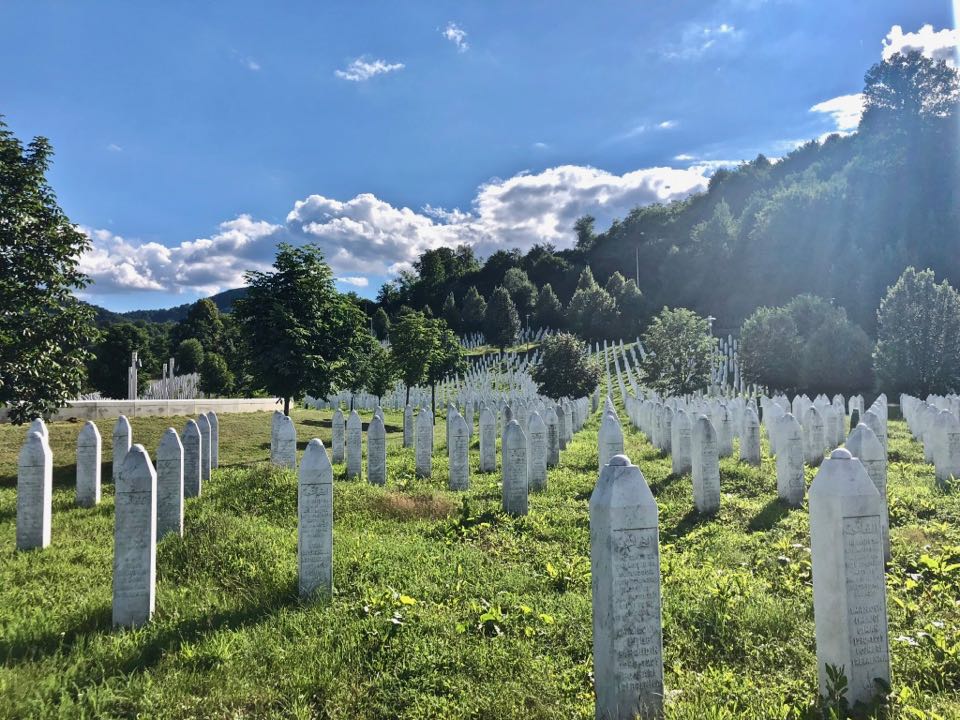 Why did I want to visit Srebrenica

At the time the Srebrenica massacre happened I was still young, but I do remember it was all over the news in Holland. Of course I was too young to understand, but somehow until today I can still remember the horrific news those days.

As a Dutchman I feel extra connected with what happened and I was eager to find out more about this extremely sad event in history. On one hand I felt like apologising to the local community in Srebrenica, but on the other hand I knew that if the Dutchbat enclave could have done anything to stop this genocide they would have. With my visit to Srebrenica I wanted to learn about the massacre, to hear first hand experiences and to pay a visit to the Srebrenica Genocide Memorial and museum.

Of course it will always be a sensitive topic to talk about in The Netherlands. Many mistakes happened and officially the Dutch government is found liable for 300 deaths in the supreme court in The Hague in 2013. 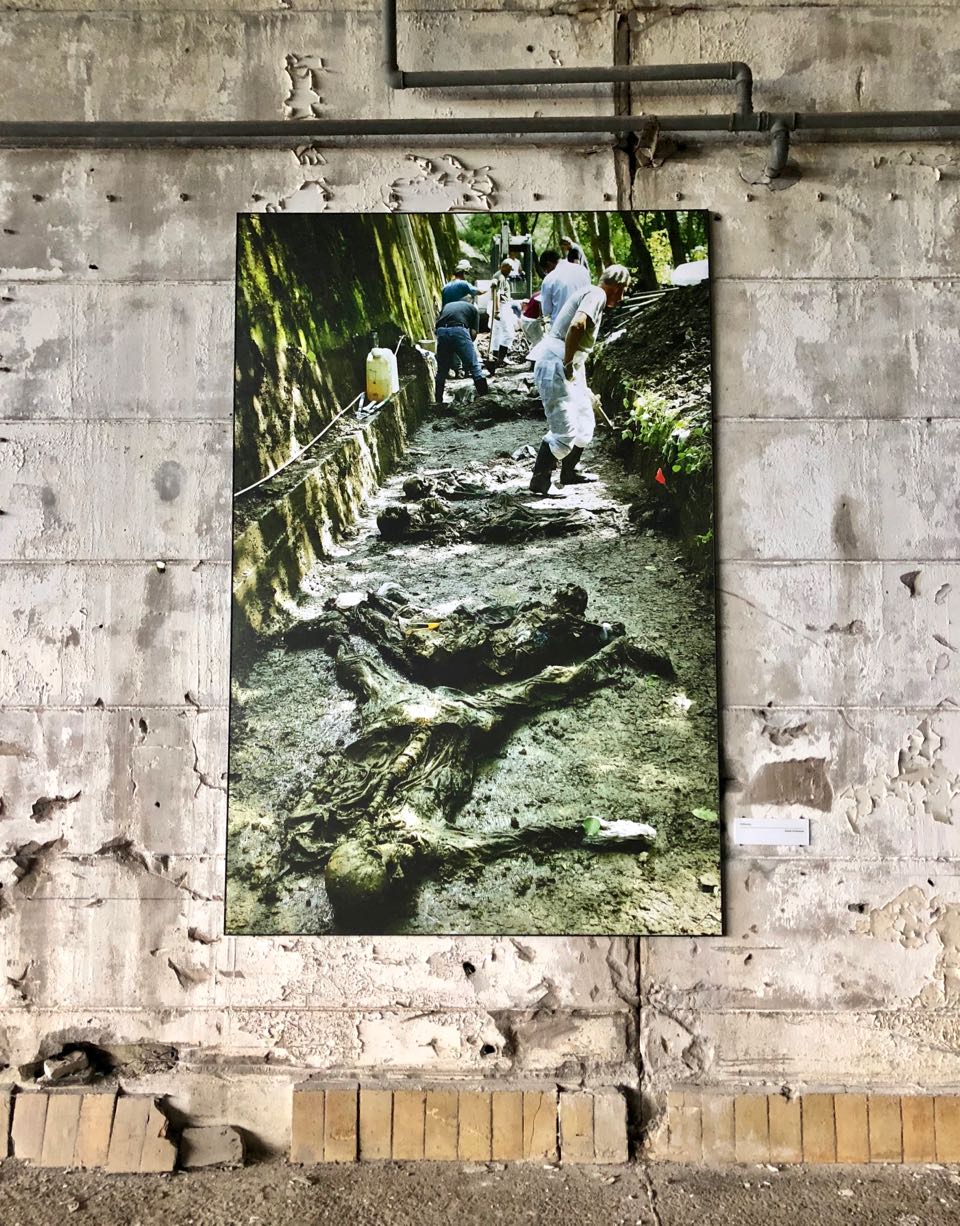 Why you should visit Srebrenica

If you are interested in war history this is one of the best places to go in Bosnia to learn about the war. The Srebrenica genocide marks one of the most tragic events in the Bosnian War and European history. It was described by former Secretary-General of the UN, Kofi Annan, as the worst crime since World War 2. Tourists are more than welcome in Srebrenica and visitors are happily shown around on guided tours. There is no entrance fee, but guided tours need to be confirmed through the Memorial Center in advance.

To book a tour at the memorial center and the museum call this number: +387 56 440 082 or email: This email address is being protected from spambots. You need JavaScript enabled to view it.. 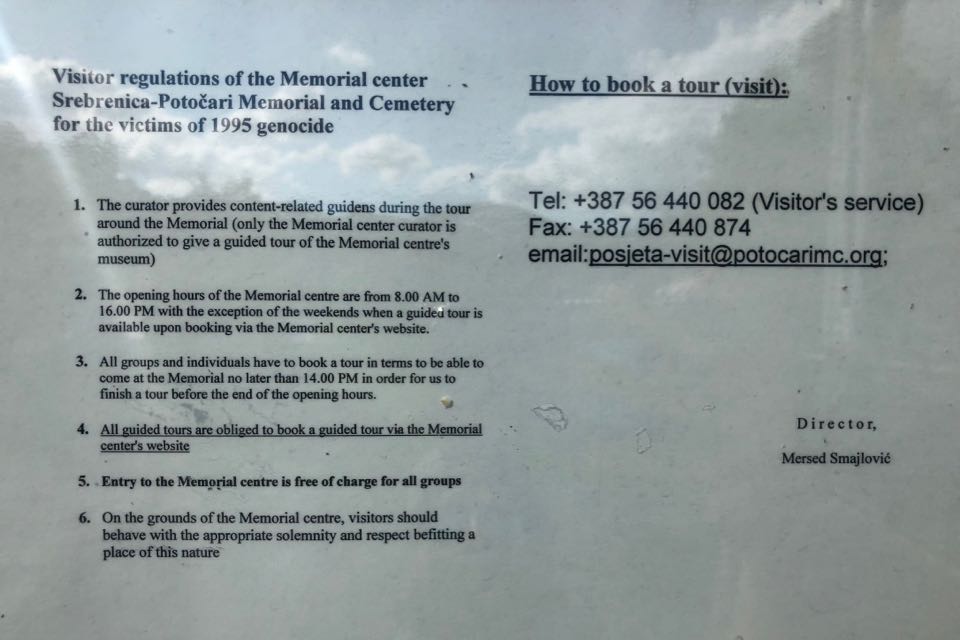 How to visit Srebrenica

As said before Srebrenica is not a typical tourist spot on a Bosnia road trip adventure. It is a little off the beaten path and lies pretty isolated in East Bosnia. There are tours from Sarajevo visiting Srebrenica.

It is a great day trip from Sarajevo, but I arrived by car from Uvac, Serbia (an amazing canyon and viewpoint) and traveled onwards to Sarajevo. From Sarajevo to Srebrenica is only about 133 kilometers but it takes up to 2,5 hours. If you have read my article about driving in Bosnia you know why that is. The drive is scenic though!

My trip to Srebrenica

Unfortunately I did not find a Srebrenica blog post online that told me all the information about visiting the Srebrenica Genocide Memorial. To be honest I did not even know about the existent of it until I arrived. There is actually very little information about it, so when I drove into the town with my Dutch car I had no clue what to expect. Do these people like to see Dutch tourists in Srebrenica? Will they be friendly?

The first restaurant I found I stopped and ordered a coffee. The friendly waiter noticed straight away I was Dutch. Probably because of my number plate. I am sure I was not the first one. I asked him if there would be any historical tours around Srebrenica, but he answered negatively. When I asked him if he was from he here he nodded positively. I am born and raised in Srebrenica while he pointed to a house across the road. Just when I wanted to ask him about the years of the war, he quickly added that he left the village for 8 years during the war. I could feel that randomly asking about these horrific years might be inappropriate, but before I could even ask him he walked away.

The people of Srebrenica will always have to live with the war in the back of their head. The survivors of the massacre will be remembered of those horrific days on every street corner. The same streets the leaders of the Bosnian Serbs triumphant walked through days after the genocide.

There was a visitor center in this sleepy little village where I could see pictures shown about the mountainous surrounding, but I wanted to learn about the history. It was Saturday and everything was closed. Then I saw Srebrenica Hostel and knocked on the door. The friendly owner told me about the Memorial Center and Museum 5 kilometer down the road in Potocari.

Want to stay overnight in Srebrenica then I can can recommend you to book with the lovely people of Hostel Srebrenica. They score a 9.1 out of almost 50 reviews!

As soon as I arrived at the Genocide Memorial I was in awe. I had no clue what to expect and how it would look like, but it cant be missed from the side of the road. During my Balkan road trip I had a lot of rain, but the sky was blue today with some perfect white clouds. I walked inside and stood in disbelieve looking over the almost 7,000 white gravestones in the green grass. Then there was silence…. 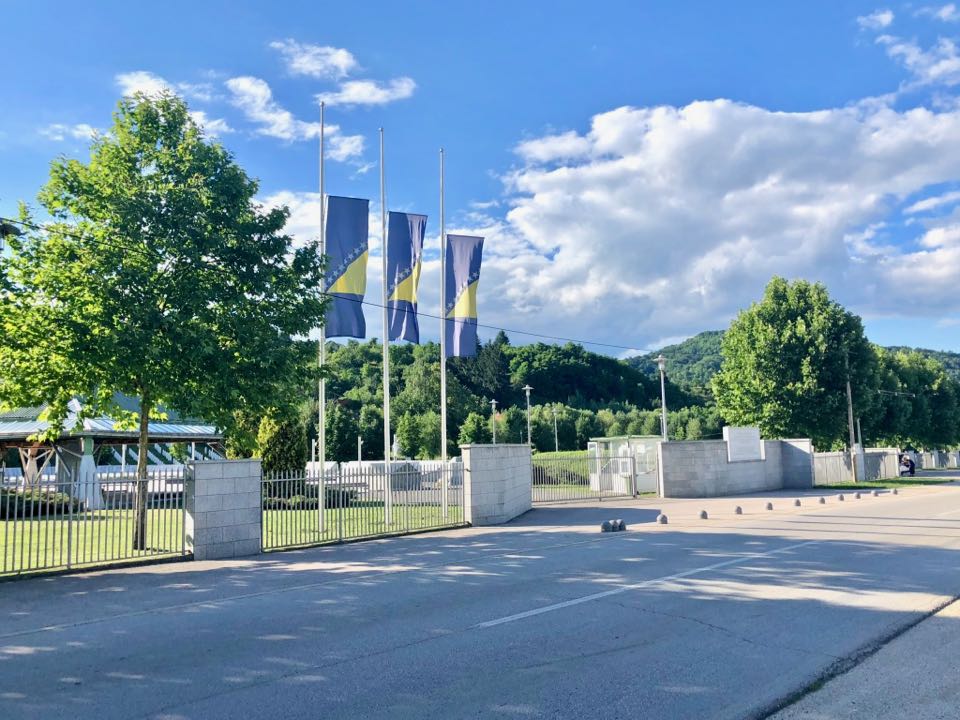 A super friendly man who did not speak a word English came to me explaining that there was also a small building with some photos, he opened the door for me. One by one I read all the descriptions of the very confronting photos. I was speechless again..

Back outside I strolled through the gravestones and read the date of birth and looked for the youngest ones: 1981. Just a couple years older than me. If I would have been here I would have probably had to see my dad taken away from me and never saw him again! Think about that and realize how easy our lives in the West is... 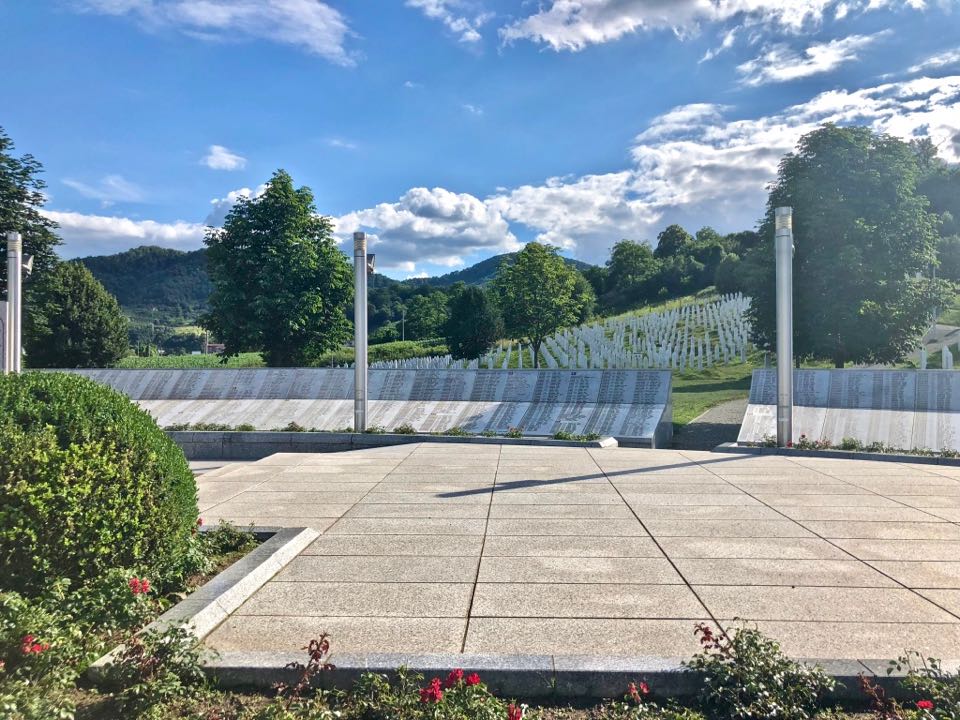 For 20 minutes I walked around this impressive memorial with my hands behind my back. I had no clue what to think, I could almost cry thinking about the massacre that happened exactly on this spot.

When I wanted to walk out of the memorial center the old man approached me again and pointed across the road. There was a rundown old factory with some deserted buildings and I had no clue what he meant. Museum he said, come! Ok? I thought the little building with 10 pictures onside the Genocide Memorial was the museum. We crossed the road and he directed me into a massive old industrial hall: welcome to the UN-SAFE ZONE it said on the wall.

When he opened the door he nodded friendly willing to say take your time. And yes I needed time… Inside this old factory is where the Dutchbat enclave of the United Nations were stationed, their headquarters, the official safe zone. This is were thousands of Bosnian Muslims tried to enter and seek shelter from the Bosnian Serbs outside. As we all know now the word safe zone did not apply anymore. 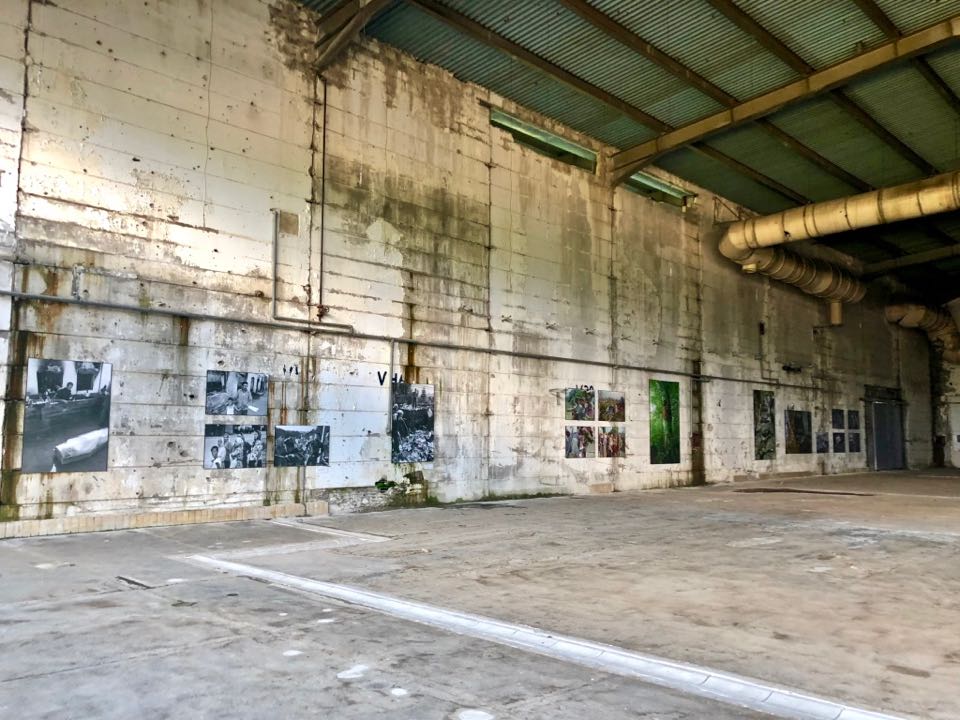 Inside the museum there were a ton of confronting photos with descriptions. Dutch paintings and words on the wall, letters that were found after the war. Of course I felt connected with this horrific event. I could read all the letters, this was my language! There were no words… 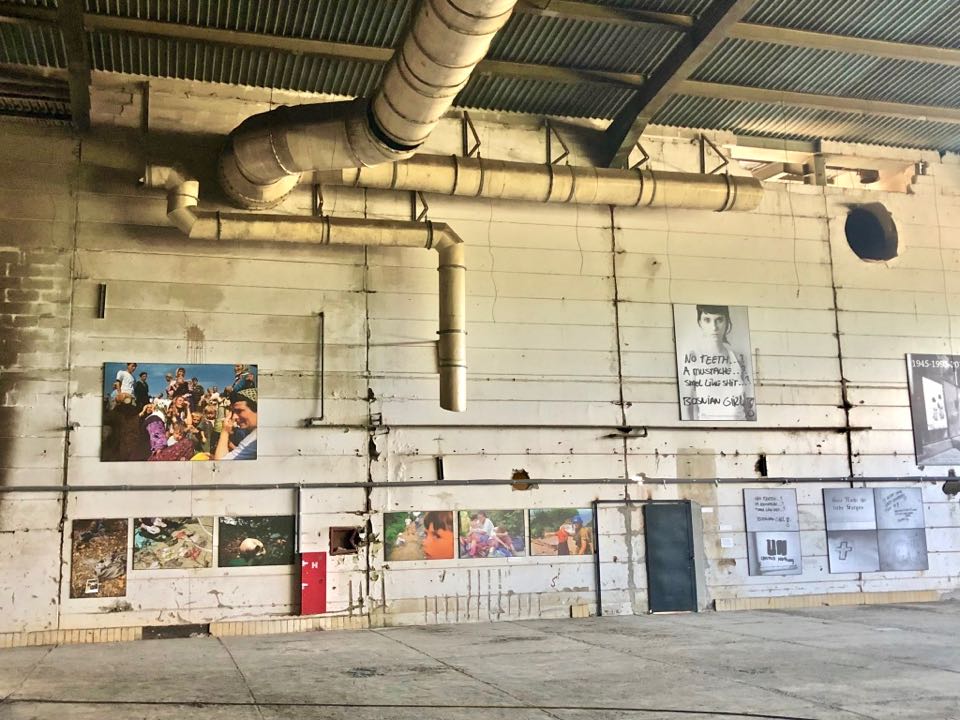 Half an hour later I walked out of the museum not having said a word. Didn’t know what to think anymore. There was silent…. for a long time! 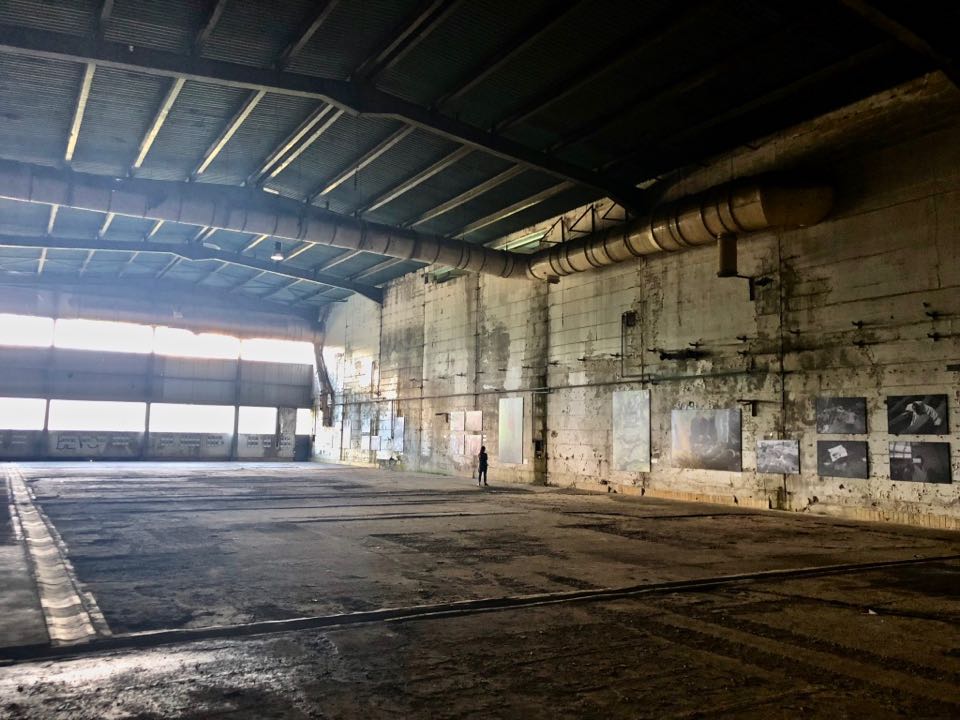 Visiting Srebrenica was an emotional rollercoaster from the moment I drove in until I left this little mountain village. It left a deep impression! 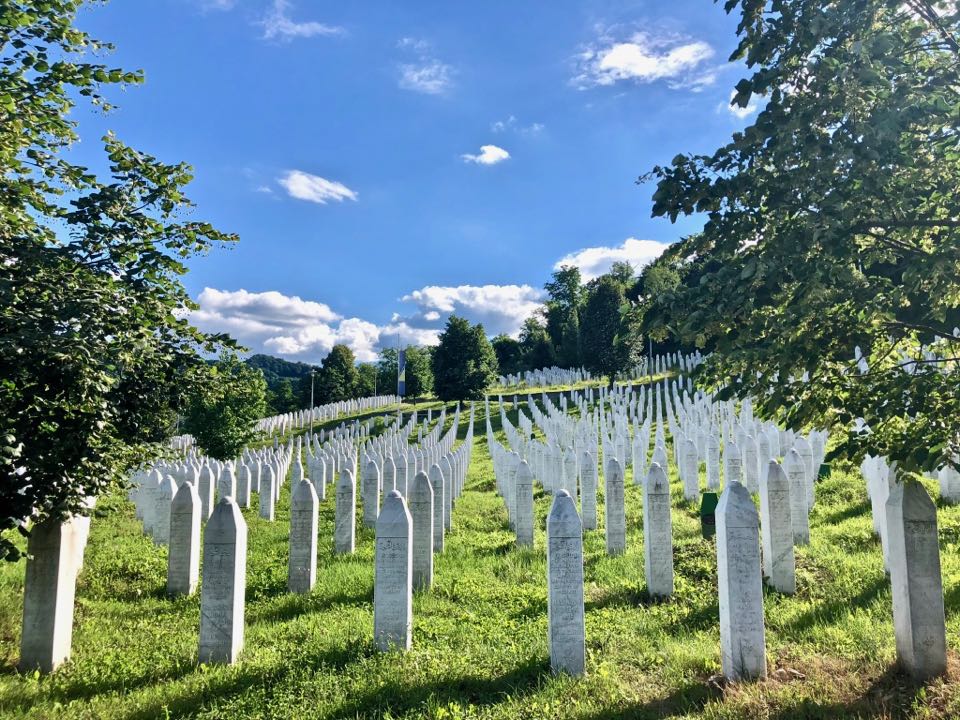 Looking back I am extremely pleased I made the choice to travel to Srebrenica and learning about the July 1995 massacre. Bosnia made a big impression on me in many ways. See what I was up to driving through Bosnia in my post with the 10 best places to visit in Bosnia on a road trip. 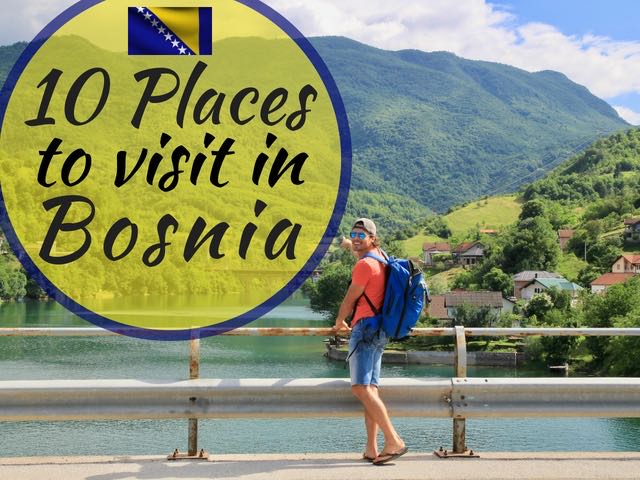 How To Visit The Uvac Canyon Viewpoint In Serbia

10 Best Places To Visit In Bosnia On A Road Trip

Everything You Need to Know When Visiting Matka Canyon Skopje