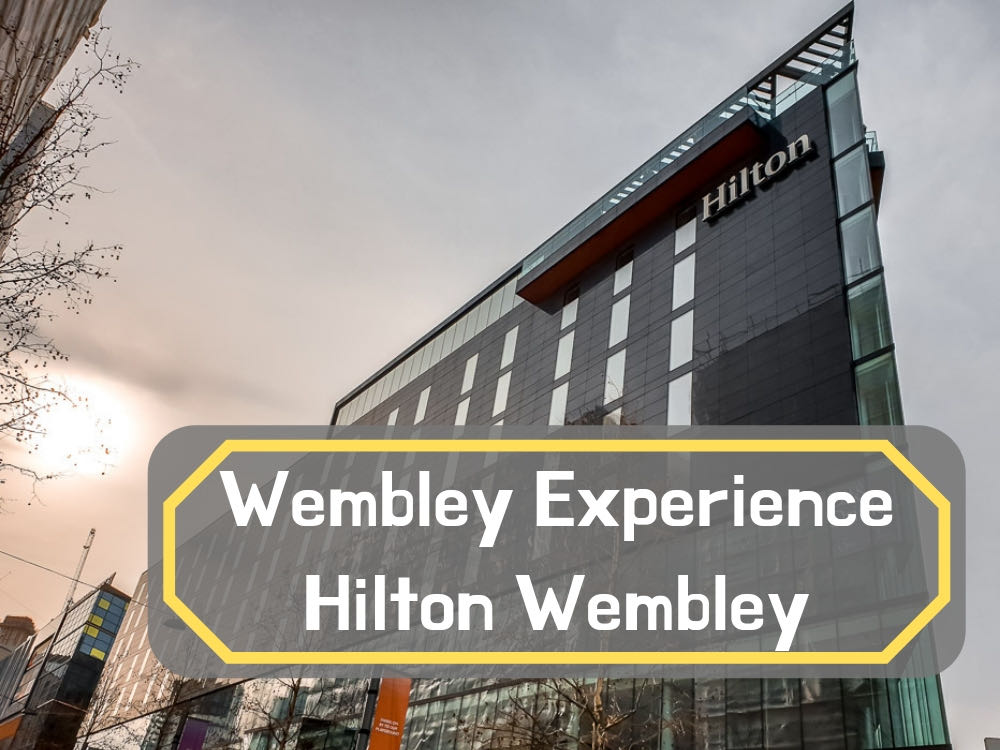 England is home to some of the biggest football teams in the world and six of the Premier League football teams have their home ground in London. Wembley Stadium is without doubt one of the most impressive and most important stadiums in football history. The historic World Cup final of 1966 was played here, when England became World Champion. But also the ‘greatest live performance in the history of rock’ by Queen during Live Aid 1985 took place at Wembley.

I recently visited the North London derby between Tottenham Hotspur vs. Arsenal at Wembley. There is no better place to stay and spend the weekend, than right next to the Wembley stadium. The Hilton London Wembley is located only meters away from Wembley Stadium and therefor the perfect place to stay. I stayed here during my football trip to London, so keep reading to find out all about this Hilton hotel. 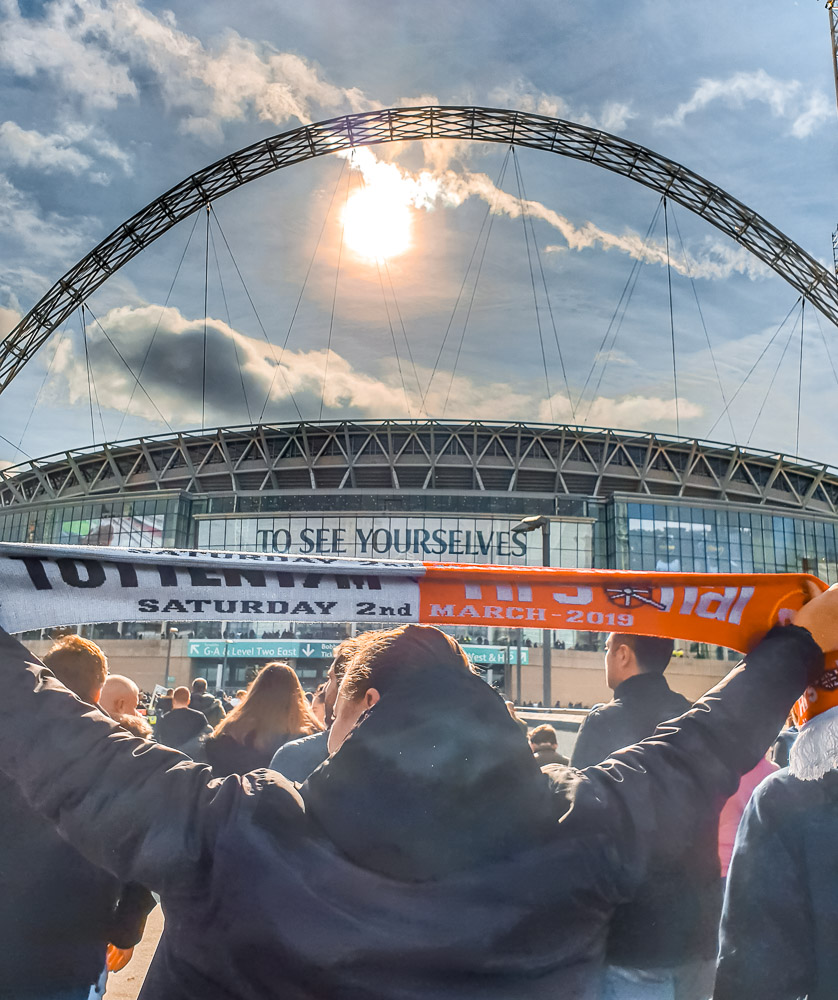 Nowadays Wembley Park is London’s newest creative hub and neighbourhood! Over the past years the London Designer Outlet, some hotels, residential and office buildings have been added to Wembley Park, attracting more people and creating more jobs. And there is more to come! New plans involve over 7000 apartments, as well as shops, offices, two hotels, a public park and a school. 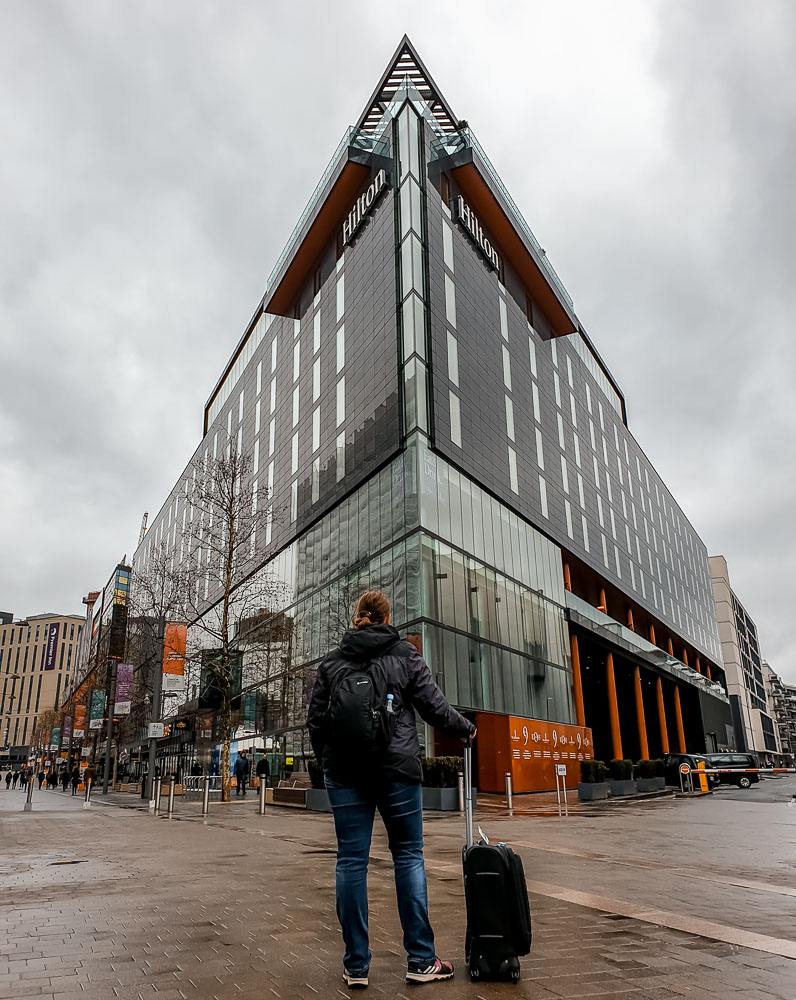 You can’t really get any closer to the famous Wembley than staying at the Hilton London Wembley. You’re literally just footsteps away from this impressive stadium. Not only the stadium, but also the SSE Arena and the London Designer Outlet are at walking distance, a true premier location for the Hilton Wembley. Visiting an event, conference or just for some shopping? You can find it all just outside the Hilton. Also at walking distance from the hotel is the Wembley Park metro station. From this station you can reach the city center of London within only 12 minutes. Which makes this area a very interesting place to stay when visiting London. It has everything to offer, yet it has a more relaxed and laidback vibe than the busy center of London. I also have to mention that there is a cinema and plenty of restaurants and bars just around the corner of the hotel, so if you fancy a good night out, this Hilton is your place to be.

I had a late night flight on the Friday night into London, which became even later as I had 2,5 hours delay. It meant I would arrive at London Stansted around 2.00 AM. I contacted the hotel and they arranged a taxi from London Stansted Airport to the Hilton Wembley hotel. The taxi was already waiting for me outside the terminal. As I arrived in the middle of the night, the lobby was empty and check in went really fast.

I was given a King Executive room on the 8th floor of the hotel. This spacious room included complimentary WIFI and access to the Executive Lounge on the 9th floor.
As I entered my room I was super happy with the large bed which I was really longing for. 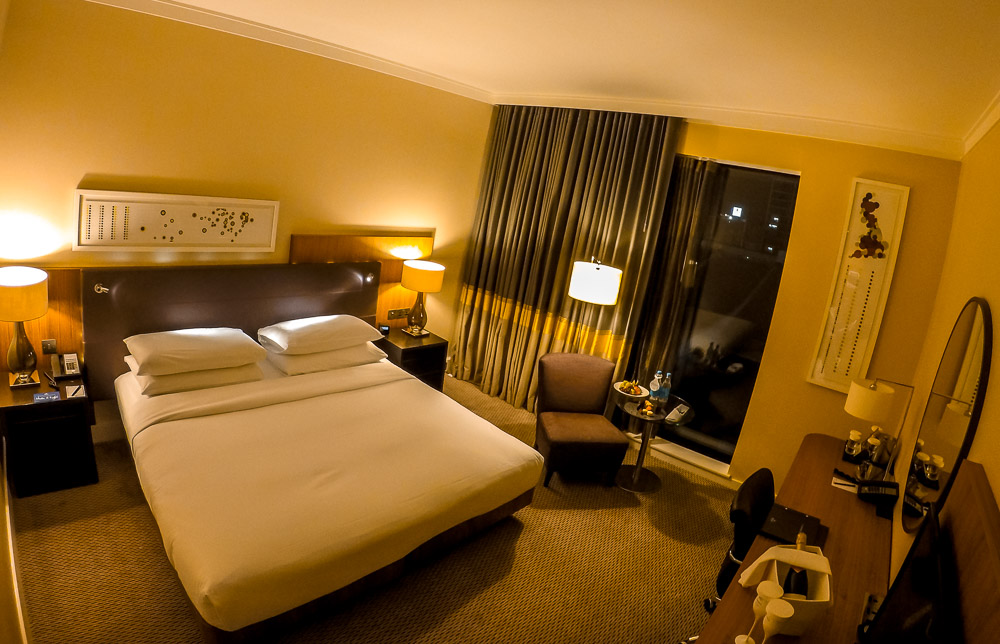 The large bathroom with bath tub and shower offers all you need. What I liked were the toiletries. Set up in sets of 2, travelling with two I can really appreciate this. The room is large with a side table and chair, large desk and decent sized television. Also bathrobes and slippers are available for you to use during your stay.
Looking around my room I could only see surprises waiting for me, a bowl of fresh fruits, some bottles of water, a plate full of sweets and treats and a bottle of cava. 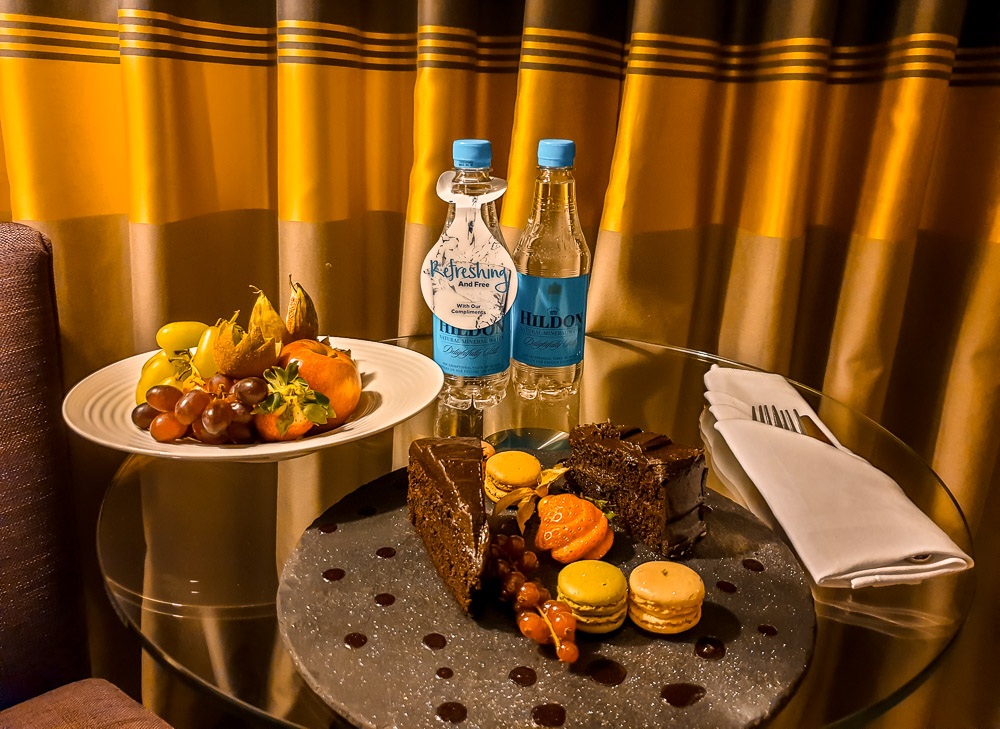 Now, that’s how you welcome your guests to your hotel! A hand written card and welcome letter makes it even more personal. Last but not least there were some gifts waiting for me, a USB stick, selfie stick and a powerbank.

I was also given access to the Executive Lounge of the Hilton London Wembley, which comes with quite a bit of extra benefits. You can have your continental breakfast here, it’s more quiet and relaxed than the main restaurant. During the day they serve a range of complimentary refreshments like fresh fruits, vegetables, scones and sandwiches. Coffee, tea and soft drinks are available as well. In the evening they serve some hot food, salads and a variety of cheeses, all included when you have access to the lounge. Take a beer or wine to enjoy the food and the relaxed vibes of this lounge. 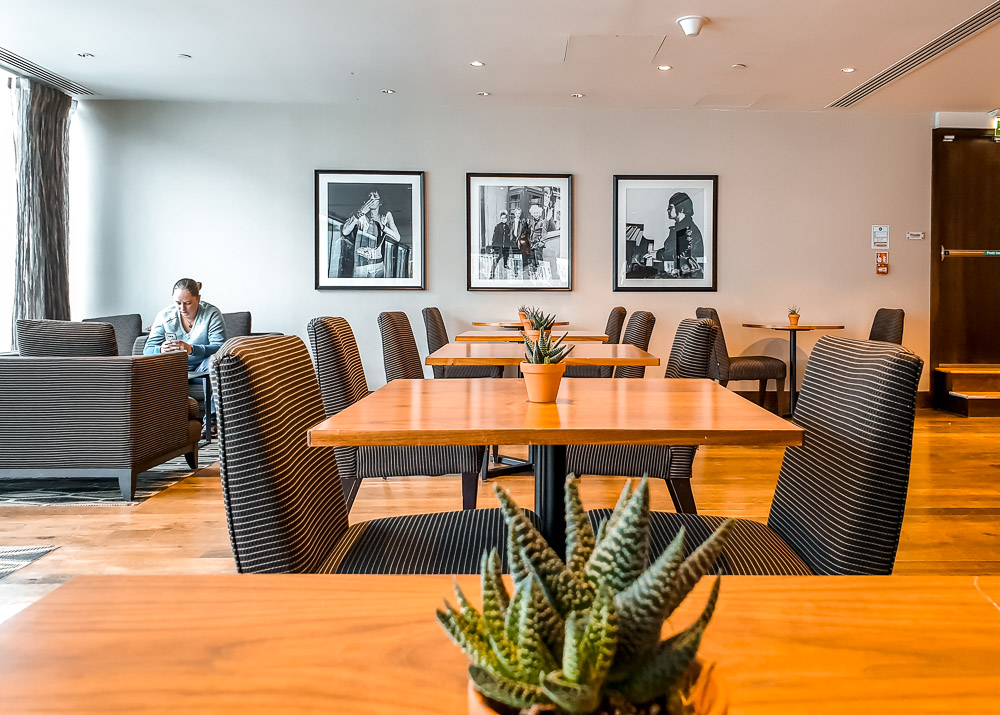 Complimentary newspapers are available in the Executive Lounge of the Hilton London Wembley as well. 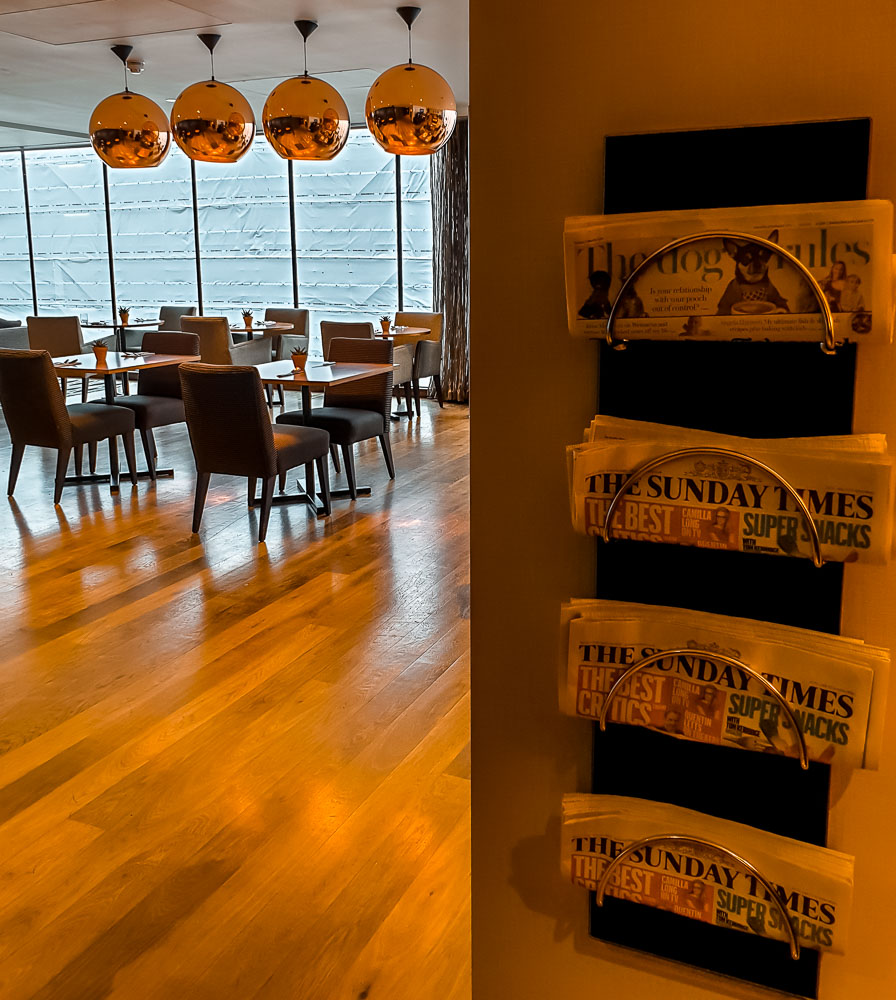 Located on the ninth floor, next to the Executive Lounge, is Sky Bar 9. The so called hidden gem in Hilton Wembley, a modern and stylish bar with a great terrace and lovely views. Offering an exciting and wide range of drinks, unique cocktails and a great atmosphere. 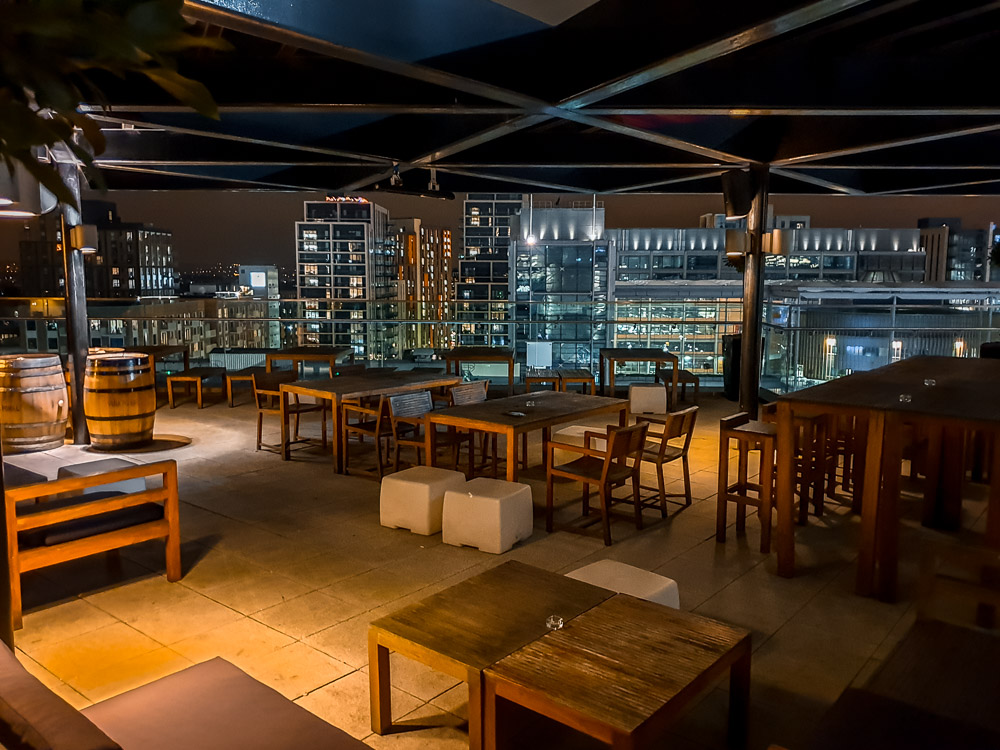 Whether you like to relax in the morning with a coffee or a light snack, looking for an afternoon tea or an after dinner cocktail, you can find it all at the Icons Bar. It’s a great place, any time of day!

The main restaurant offers you a modern style British cuisine mixed with a relaxed atmosphere and great ambiance. Breakfast is served here from 6.30 am to 10.00 am on weekdays and on Saturday and Sunday even until 11.00 am. Which meant I could sleep in after my delayed flight and late night arrival at the hotel.
From this restaurant you used to have amazing views of Wembley, however with the development of Wembley Park going on, there are residential properties being built right in between Wembley and the Hilton London Wembley. 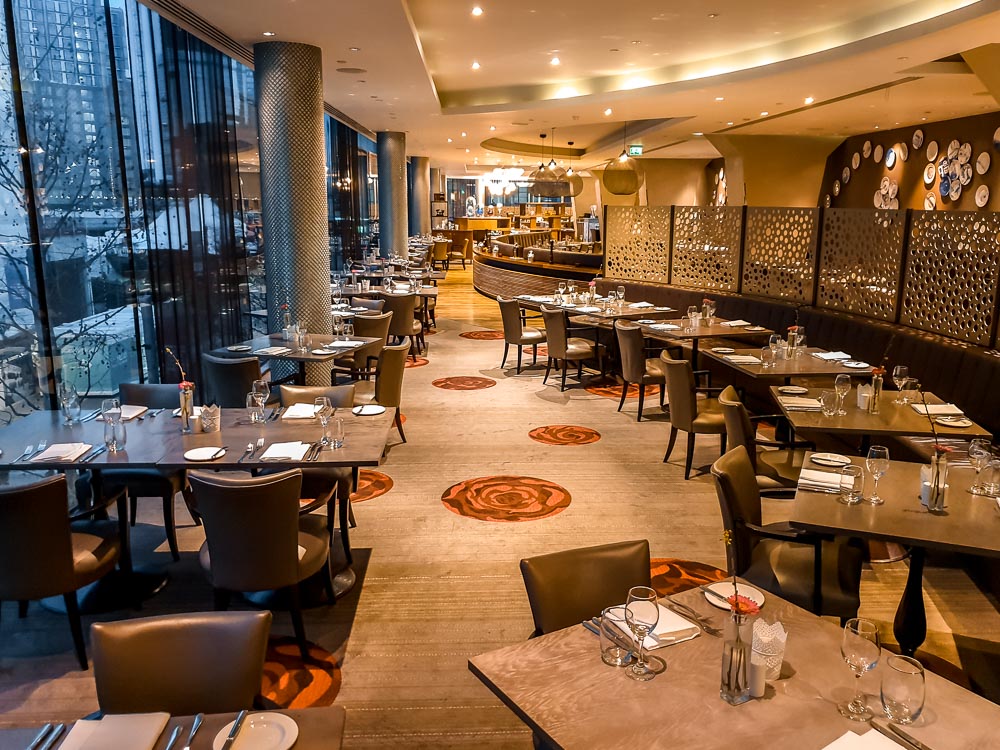 The staff at the restaurant during breakfast were super friendly and helpful and love to have a conversation with you. They were trying out a new breakfast table set-up at all Hilton London hotels. This set-up gives staff more time to pay extra attention to their guests. Keep this set-up guys, it’s a winner!

On the second floor of this hotel you can find the LivingWell Health Club. It offers a gym which is open 24 hours to hotel guests. This gym features the latest fitness equipment. The health club also offers personal trainers to those who want to achieve maximum results. There’s also a 12m heated pool, with jacuzzi and a sauna and steam room. The LivingWell Health Club of the Hilton Wembley offers a range of swimwear, goggles, float bands and dive ring and sticks.

For me the best part of this hotel is the lobby and the hall of fame. Upon arrival I walked into a real McLaren Formula 1 car, driven by Fernando Alonso, in the middle of the lobby, an eye catcher for sure! 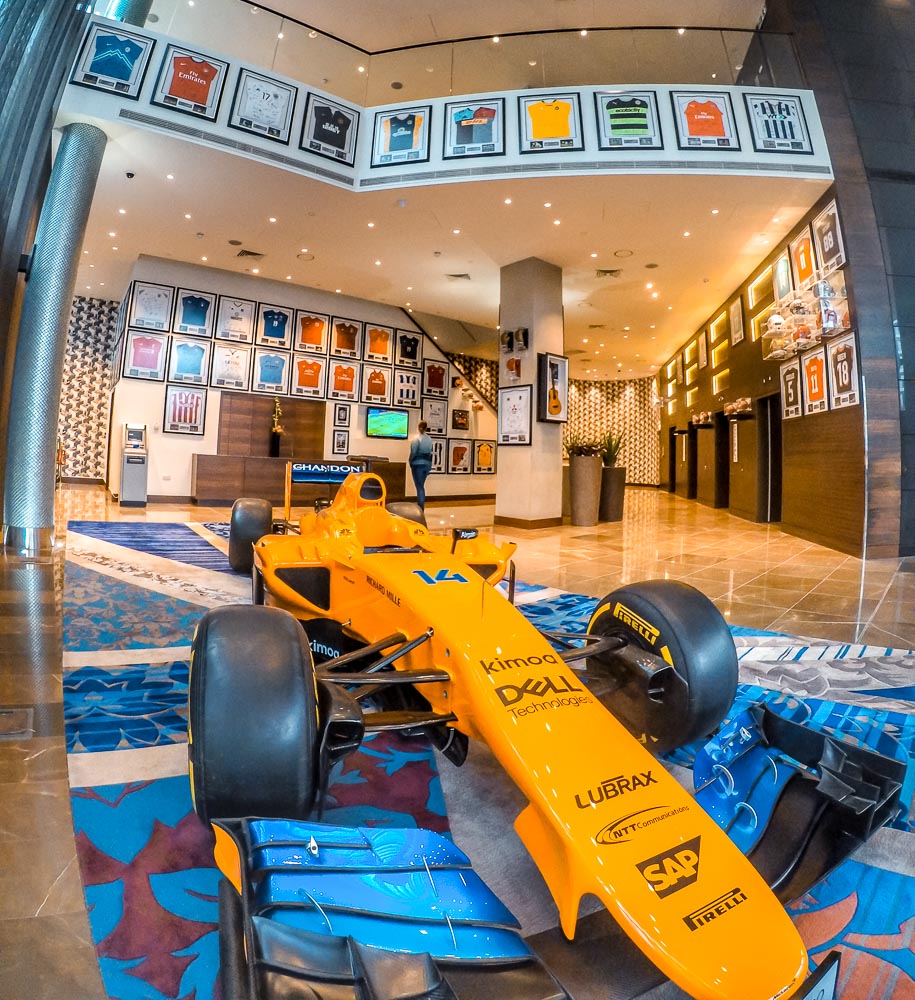 From Ed Sheeran to boxing legend Anthony Joshua, from the All Blacks to the NFL and of course many National and Premier League football teams. Have a look around this Hall of Fame for autographed jerseys, guitars, helmets, gloves and balls. 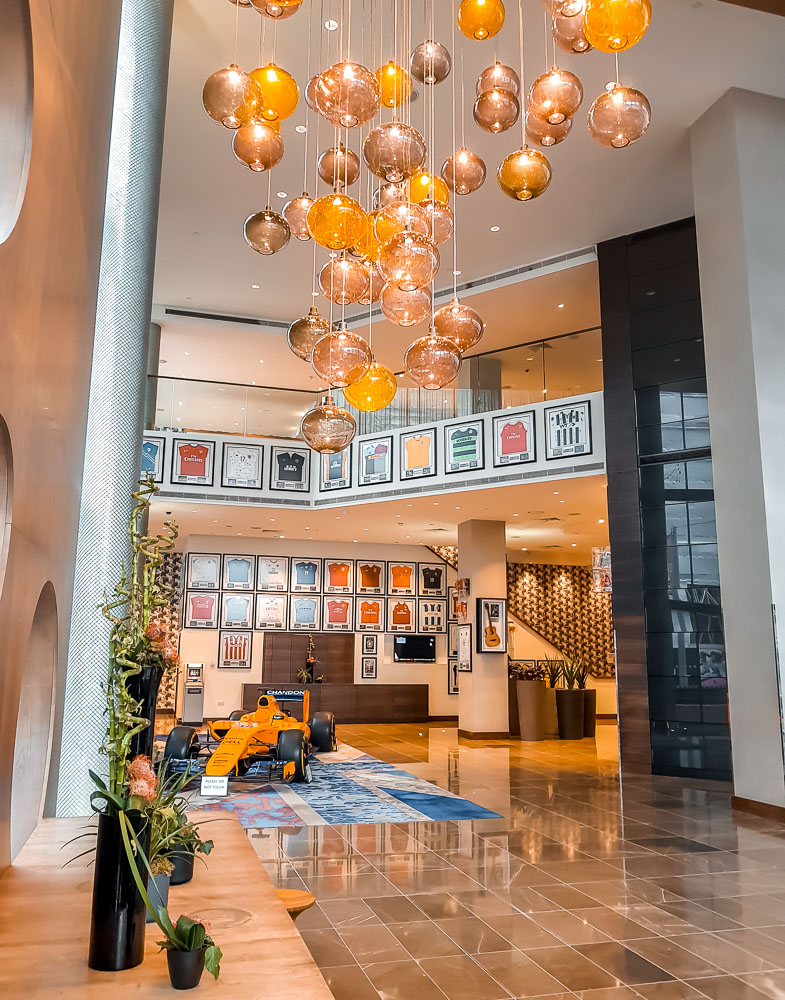 I mentioned before that my main reason for visiting London was the North London derby between Tottenham Hotspur and Arsenal. Knowing this hotel hosted many celebrities and sports teams before, I never thought it would happen while I was staying there. But I was lucky, the complete first team of Arsenal stayed at the Hilton London Wembley the night before the game. I had to pinch myself, am I really staying at the same hotel as the Arsenal team, in fact, even on the same floor? It turned out I was! I slept in on Saturday and left my room pretty late, which was right at the time the Arsenal players were leaving their room to make their way to the bus. I even scored a photo with one of the players.

When traveling to Wembley London this is the hotel where so many celebrities have stayed at before so get the star treatment yourself. Curious to the rates, check them here.

This Hilton London Wembley review was written by Ashley, an avid writer for Traveltomtom.

London Eye | Number 1 Must Do in London