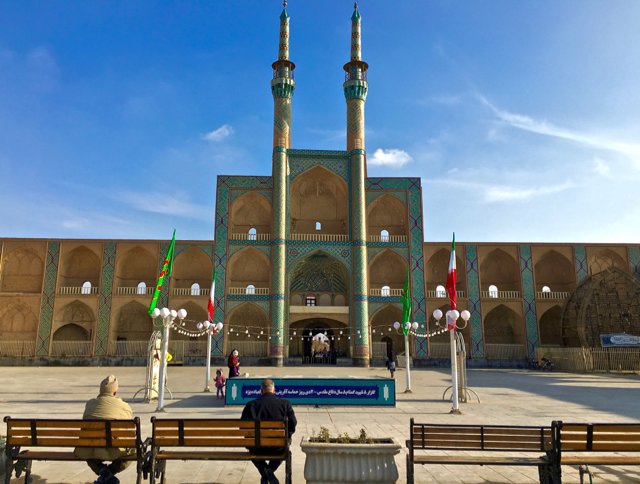 There a lot of influences that make you decide what you are going to do and where you are going. Plans change constantly while travelling! Unfortunately I got pretty sick in Esfahan, which made me stay there a couple nights longer. New years eve was coming closer and I wanted to spend that night with friends in Dubai, so I only had a couple days left. Where to go? Was it gonna be Shiraz or Yazd?

Shiraz was another 8 hours travelling down south from Esfahan where Yazd was a shorter stop along the road. Keeping in mind that I also had to travel back to Tehran, I chose to stop in Yazd. This desert town wedged between a desert in the north and one in the south is famous for its lovely old town. With the amazing old town of Kashan in my mind it was an easy decision to travel to Yazd.

Comparing Yazd with other main touristy cities in Iran it does not have a highlight that attracts the huge crowds like the massive square in Esfahan for example. If you are travelling here you are coming for the charm that this city boosts. Like in Kashan the mud-brick old town is equally enchanting. Though there is a difference! Where in Kashan the walls are as high as only 2 meters and most of the houses are build underground, the mud-brick walls in Yazd are up to 4 meters high. Comparing these old towns I would say that Kashan is more alive where the one in Yazd is more like a maze and therefore has a more adventurous vibe. In Yazd you will find numerous rooftops with stunning views, the perfect place to drink tea and enjoy sunsets over the nearby mountain range. 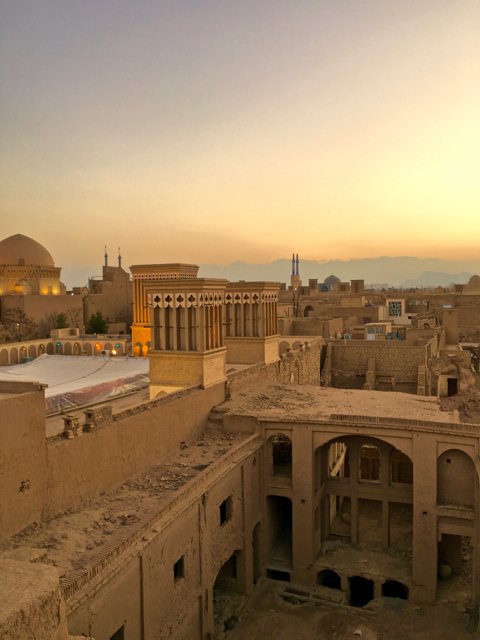 Roaming around the old town was obviously one of my favorite things to do. It is always a big surprise what’s behind these high walls and after discovering some cool coffee places, stunning guesthouses and lovely restaurants I already loved this city so much that I could stay here for a while. Unfortunately I only had 2,5 days before I had to catch a bus to Tehran and fly out of Iran. I made the most of it and roamed the city from dusk till dawn. Of course not missing the great mosque and some other impressive architecture. The Masjed-e Jameh Mosque can’t be missed with its 50m high minarets and its exquisite mosaics decoration. Don’t forget to walk in and be amazed by the stunning courtyard. Walk inside, look up and be dazzled by its fantastic dome. 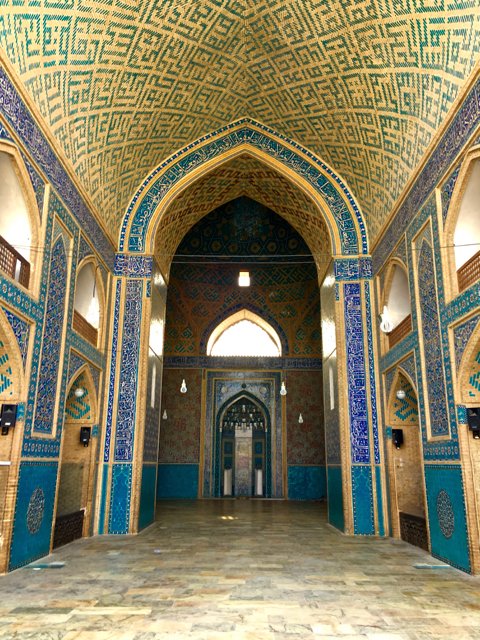 Another piece of architecture that caught my eye looked like a mosque to me but was apparently something different. I am still not sure what it really was, but the perfectly symmetrical building is something that can’t be missed either. Actually I think it was all part of a massive roundabout and the structure was build on a small narrow passage that houses a couple lovely kebab stores. Well worth going for a local food experience and very cheap.

Furthermore I visited the water museum, which was cool to see, but pretty expensive for Iranian standards and for what you get in return. Interesting to see though how this desert town evolved around a couple man-made underground rivers.

The last sight I visited was the Zoroastrian Temple where you can catch a glimpse of a fire that apparently started burning long before our friend Jesus was born. To be honest I was not impressed at all, but the Zoroastrian religious is supposed to be one of the oldest out there, so to me it was more like a been there done that experience. 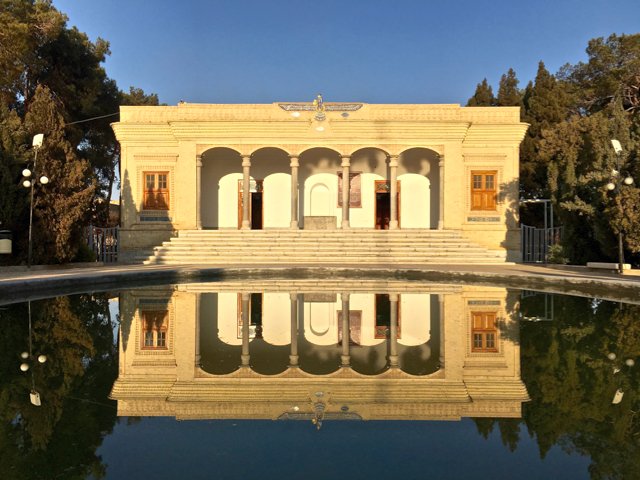 Yazd has a charming feeling and you will encounter that easily in the old town. There are several rooftops with splendid views. What will directly catch your attention are the many towering structures on the roofs. The so-called badgirs are the first version of a modern air-conditioning. These things are designed to catch even the lightest breeze and direct it to the rooms below. Summers in Yazd can be extremely hot and back in the days they invented this ingenious system to cool their houses.

One of my favorite places to go and grab some food was the Silk Road Hotel. The served local food was delicious, but the homey feeling and the many travellers that were meeting in this place was something I had not seen before in Iran. The cool thing about travellers in Iran is that a lot of them are long-term travellers crossing the continent on the Silk Road. Many of them are cycling from Europe to Asia or the other way around! Travellers with a lot of stories to tell; it felt like a living library!

About accommodation you don’t need to worry that much since Yazd has a wide range of options and even some dorm rooms are up for the grab. Yazd was a place I would recommend for sure. It has may be not the big attractions, but for sure you will find some cool stuff to keep you busy. During the evenings there are a couple places to meet up with fellow travellers, so you will definitely not be bored!

Buying a Sim Card for Micronesia in 2023

Beekse Bergen | Safari in the Netherlands

Buying a Sim Card for Solomon Islands in 2023