Why 1 day in Tehran is enough! 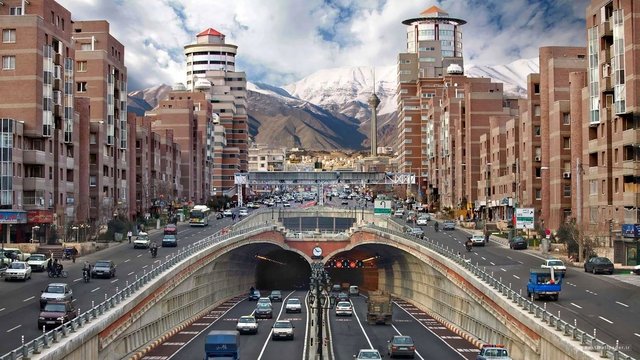 Arriving in Tehran started with a horrific taxi ride from the international airport to the city center. I was offered a pick-up from the hostel in Tehran and looking back I was glad I paid the €25. I have seen bad traffic, lack of respect and crazy things happening on the road throughout Asia, but Iran will definitely end up high in a list of insane traffic around the world.

I did not spot any fancy cars at all, but after a while I totally understood why. All cars were bruised and battered and even my taxi touched another car while overtaking in a traffic jam. After 2 hours I reached my hostel and the owner was not around but the amazingly friendly Australian guy that was staying there helped me through my first hours in Tehran.

While trying to look for a budget accommodation in Tehran you wont be spoiled for choice. In total you will find only two options for solo travellers unless you are willing to spend more than $35 for a crappy hotel. I stayed at Tehran Hostel in Teheran and you will find it on Google Maps. This place is all about the owner. Mori is an amazing laid-back host and he will make sure you are enjoying. Furthermore this cozy place is the perfect spot to meet other travellers. The location is very central and close to the metro station. Mori also arranged me the required documents for the visa on arrival! The best way to get in touch with him is through Whatsapp: +98 912 725 7703.

The next day David and I decided to explore the capital together and we headed out to the metro station to get me some Iranian Rials before we paid a visit to the former US Embassy. Graffiti painted walls with ‘Go Down USA’ and the statue of liberty portrayed with a skull where signs that the Americans are not Iran’s best friends. So far a lot of Iranians I spoke with feel ashamed for these paintings and want them to be removed. For me it was something unique, something I had never seen elsewhere around the world. The film Fargo is all about what happened here in November 1979 when conservative students burst into the US Embassy and took 52 people hostage for 444 days! An action the supreme leader of the Islamic Republic later spoke about as a victory over the Americans. Unfortunately its not to enter the former Embassy as it has been used by the military ever since. It does houses a museum where they show documents that proof the suspicious actions of the Americans in that time. According to the guidebook it’s only open every year from February 1st till February 10th!

It is worth taking a look, since there is a metro station just a few meters away from the front gate. Walk around and feel the history! Taking pictures can apparently be tricky as there have been reports that tourists had to delete them after questioned by the police. I made pictures and even some videos while fully equipped soldiers where walking around. Take a look at my daily vlogs about my adventures in Tehran with videos from the former Embassy.

Lately the news is full of stories about Tehran and its smog problem. A couple days before we already saw that happening as we were about to head up to the Milad Tower. This 435m high concrete construction is the most iconic of Tehran’s skyline. Views of the city and surrounding mountains can be great on a clear day, though that was not today. You could barely see anything in the distance so we decided to save the $4.

A coffee and a walk through the park later I finished my first day in Tehran and I was not impressed. The horrendous traffic did not make it a pleasant day sight seeing. The metro network is very convenient to travel around and is super cheap. But at the end of the day it is all about the sight that take your breath away and however I did not yet go to the Golestan Palace, which is supposed to be the highlight of Tehran, Tehran does not has that much appeal to me.

A local guide to party in Esfahan

Getting a visa on arrival Iran

Off to Iran with Emirates Airlines