Why Kashan is my favorite city in Iran 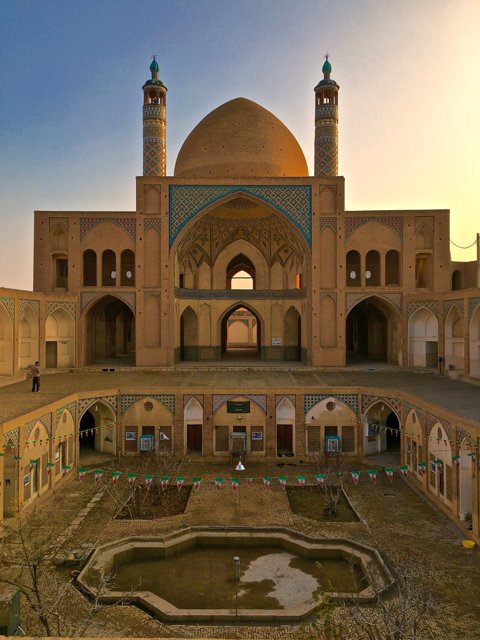 There are a couple essential criteria, which make a city a perfect stop for travellers. Obviously there must be some top sights that lure you in the first place. Second vital thing is fairly priced accommodation options and third a laid-back city vibe. In Kashan I found it all!

Kashan is not in everyone itinerary as most people opt for the big three: Esfahan, Shiraz and Yazd and skip this laid-back city on the edge of the Dasht-e Kavir dessert. There are a couple sights that cannot be missed and are all worth paying a visit, though my main reason to suggest Kashan is its lovely old town. 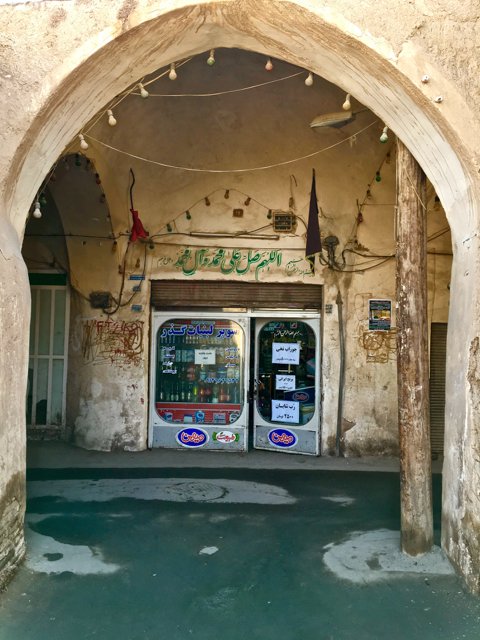 As we arrived in Kashan we still had no clue where we were about to crash that night so we told our taxi driver to drop us at a place somewhere along the main road that was mentioned in our guidebook. As always the taxi driver suggested we should not go there and consider staying somewhere else. Normally I am not a big fan of this marketing chitchat, but we felt that he was a sincere man and we decided to give him a chance. He called ahead and we haggled the price down to a decent level. In fact we were given a massive discount and ended up in a very nice place. The young guys that were running the guesthouse were lovely and our room was an amazing bargain for the $10 we had to pay per person. 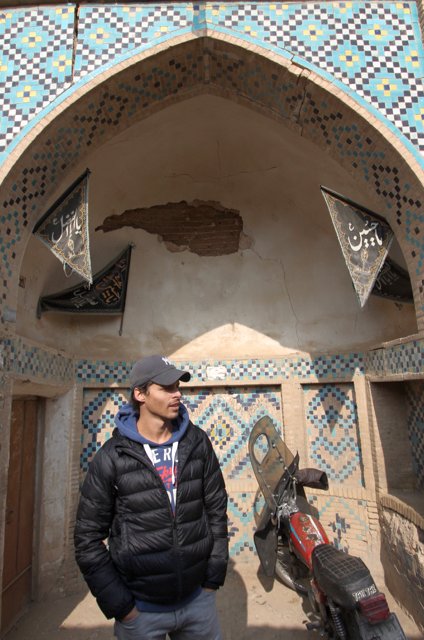 My stay at the Kamalamolk Traditional Guesthouse was one of the reasons I really liked Kashan! If I would have had more time I would have stayed here longer. The first day we arrived pretty late and it was getting dark. But the next morning we immediately fell in love with the sleepy old town. Our Guesthouse was located in one of the narrow mud-brick streets. We walked around for a couple hours and got lost a couple times. People were all very friendly and invited us to come and have a look inside. Sometimes I was even taller than the walls of the one-story houses. Hardly anyone was out on the streets and some houses were completely abandoned. Probably in a couple years time souvenir shops and guesthouses are all going to settle in this lovely area.

On the outskirts of the old town there are a couple traditional houses that are worth paying a visit. These houses, which are decorated within the smallest details, are hidden behind high mud-brick walls and are situated around a lovely courtyard. All of them ask a hefty $5 entrance fee, so I only visited one. 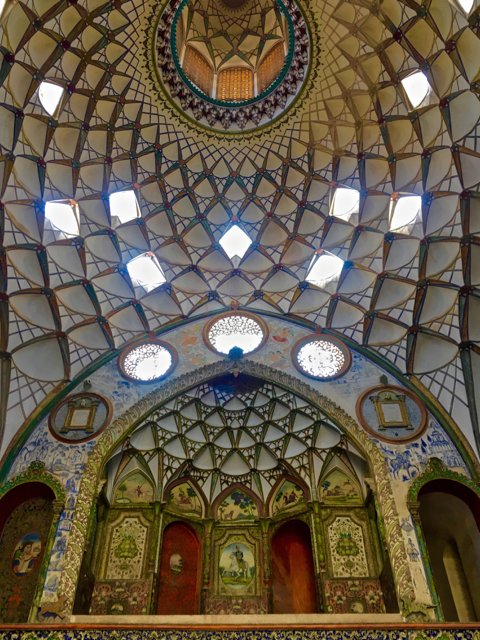 On top of all these experiences we ended our day at the Masjed-e Agha Borzog Mosque. This symmetrical architectural masterpiece has 4 stories and a courtyard that is on level -1. From the outside it looks nice, but once you get inside its beauty will amaze you. The most amazing thing was that we were the only tourists. It’s unbelievable but for such a stunning sight you expect loads of tourists. 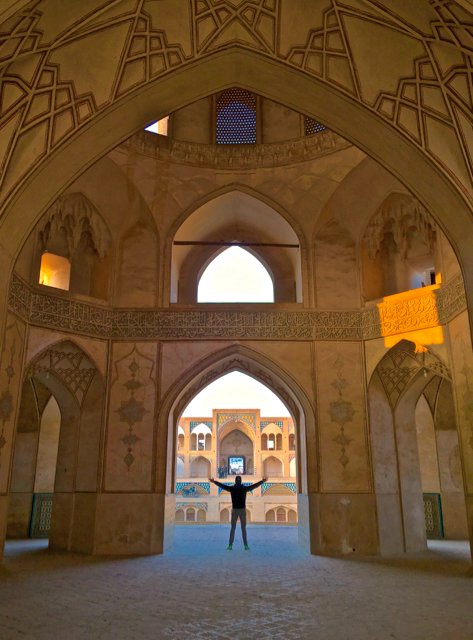 Kashan is also a good hub for some very nice tours in the area. Just 9km outside the city there is the Fin Garden, a UNESCO World Heritage sight and nice to visit on an afternoon. Hop on one of the many local busses and pay the driver 5.000 IRR ($0,15). Don’t forget to enter and exit the bus from the front door, the back door is ladies-only! 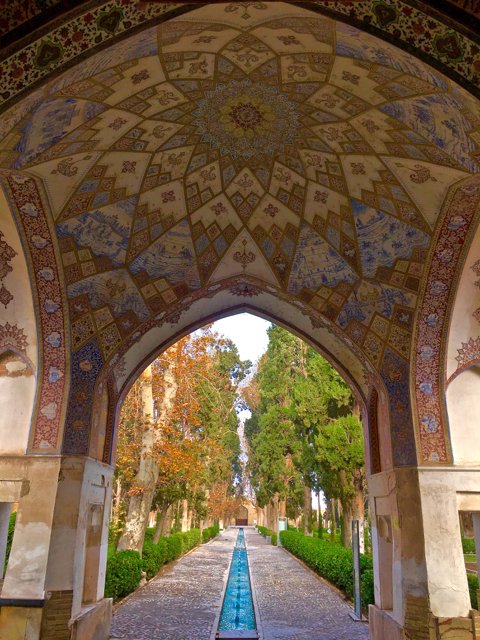 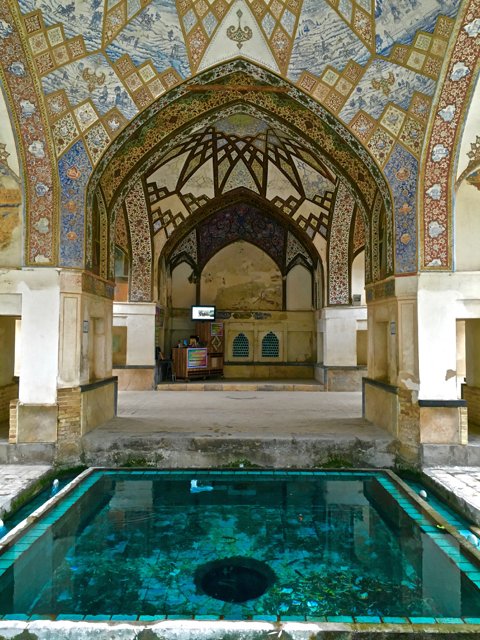 A mere 80km uphill on the foot of Mt Karkas you will find the ancient village of Abyaneh. Its said to be more than 1500 years old and wandering around the steep narrow streets of this red village is a step back in time. Abyaneh isn’t served by public transport unfortunately. A budget option is to hitchhike and in a country like Iran it wont be hard to find someone that is willing to practice their English on their way uphill. But in the low-season taxi drivers will tour you around for about 6 hours for as less as $25. Split that with a couple people and visiting this sleepy mountain town is a bargain.

Furthermore you will stumble upon tour guides around the city that offer tours into the desert, visiting a picture-perfect mosque, an underground city and a salt lake before ending your day in a traditional caravanserai somewhere in the middle of nowhere! Due to lack of time I did not take any of these tours but in the low season you will find someone who is willing to show you all this for about $35-40 per car.

I didn’t even talk about the bazaar in the city center, which is pretty laid back and worth getting lost in for a couple hours. Ask around for an old bathhouse converted into a traditional teahouse.  The place is called Hammam-e Khan and is where you will find young locals playing around with water pipes.

So if you want to get away from the crowds and enjoy a peaceful sleepy town with some amazing sightseeing then don’t forget to stop in Kashan!

Buying a Sim Card in Dominican Republic in 2022

Buying a Sim Card in Paraguay in 2022

Buying a Sim Card in Colombia in 2022

Old Dubai Walking Tour | A Different Side of Dubai
Tweet